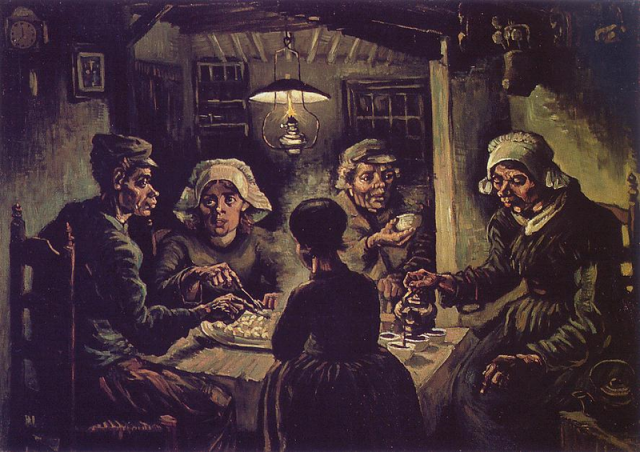 Marquel, TPVs NYTimes Anti Aggression Section correspondent, was making French fries for breakfast, when he read  Russia: Putin Defends Soviet-Nazi Pact.  President Vladimir V. Putin has revised his opinion of an important piece of Soviet history, calling the 1939 Molotov-Ribbentrop pact that Moscow signed with Nazi Germany to divide up Eastern Europe “not so bad.” Marquel hummed a bit as he thought of Putin’s new take on the anti aggression pact between Russia and the Nazis. Last month Putin called it immoral. The pact allowed Hitler to ignore his vulnerable Eastern flank and concentrate on conquering all of Western Europe, sans England.

Not so bad? As soon as Hitler finished with Europe, he trashed the pact and invaded Russia, costing 20,000,000 Russian soldiers. What could Putin be thinking? Does Putin think?

I called the consul in New York and said I was an historian of potatoes. Russia seems to have an overabundance of potatoes.

“Certainly, come right over.” He said. I heard the unmistakable sound of a cork being pulled. “I think I have your answer right here.”

At the embassy we talked potatoes for a while. I had to scramble for ideas. He asked me how far back in potato history was I going.

“Something religious there,” he said nervously. He poured us both some vodka. The cork was on the desk. He had a head start on me.

“No, not really. The inevitable anecdotes.” I answered.

“Ah, religious potato anecdotes. I love them.” He seemed ready to swoon but picked up his glass and emptied it. “You know we Russians have an interesting religious history. My grandmother was Orthodox. Christian. Then with communism we all became atheists. Less holidays. Then the Wall, you know, and now we’re becoming orthodox again. Christian. It’s enough to question your beliefs. But about those potatoes.”

I straightened up and shook my papers, and tried to look seriously interested. “Yes?” I urged.

“It has to do with vodka. Remember Yeltsin? He made us Christian. He didn’t mean to but he was obviously shlossed all day. If he hadn’t faced down the government all red faced and completely inebriated, we might have gone back to atheism. And communism. But vodka saved the day. And there’s your answer. We only seem to have an overabundance of potatoes. It’s all vodka. Putin is trying to get us to scale back.”

“Well thanks for solving my mystery.” I thought I should scratch my head to seem relieved. So I did. “Speaking of Putin, what’s this with the Nazis? He thinks it’s good that Stalin gave Hitler a free pass before attacking Russia? The whole world, including all historians, are in agreement on that one thing. It was an immoral travesty.”

“No more,” he said, unfolding a long fax. “I have my instructions here. The Stalin Hitler pact was good. The Black Plague was a useful incident in the absence of contraception. Black Slavery in the U.S.was bad because it was…in the U.S.   Mother Russia had far better slavery called feudalism and white Russians. Mendel was stupid but accidentally right. Should I tell you more?”

“What about domestic violence, gay rights, Crimea?” I asked.

He shuffled through the reams. “No, nothing about domestic violence. But gays, it says, are all Jews. I’ll have to remember that because it makes no sense.”

He looked up at me, obviously thinking it over, then said, “whatever. Here’s Crimea. It had no anti aggression pact with Russia, which amounts to an invitation. We were invited in. No problem there.”

“Anything about potatoes?” I asked, trying to maintain my cover.

“Well, in a way. It says everyone will need a license to purchase vodka. Except the Federation President. That’s Putin. No Star Wars stuff.”

“I understand,” I said, scribbling furiously. “Jeez, you don’t think Putin’s been hitting the bottle lately?”

“Oh yes, for him, who hardly drinks vodka, when he starts, he can’t take it. He turns into a Yeltsin. One bottle for him is like four for me. Eight.”

“What caused this?” I asked

“I am a bit far away,” he said, with the hint of a whispered “thank God,” but he continued, “but things eventually arrive at my desk. I think it was three things. First was Sochi,” he said.

“The Olympics?” I queried.

“Putin had his heart set on the curling medal. It’s such an easy sport, he insisted. Even practiced with the team daily. Russians are so good with a broom. We sweep all our lives. We lost. Then he wasn’t in the Vanity Fair best dressed list. He was crushed. That night he returned to vodka.”

“You said three things,” I reminded him.

“Pussy Riot. One night, after much vodka, he asked them out. They said no.” He said.

“He drives a hard bargain.” I admired.

“I would have taken three,” he said, extending his arm. I left knowing all I needed to know about potatoes.

As I left I couldn’t help turning back and asking, “what kind of people would want a non aggression pact, do you think?”

He took the bottle from his lips, wiped them with his sleeve, and said, “I don’t know.” He raised his eyes to mine and ventured, “aggressors?”

“And what kind of people are most likely to break such a pact?” I asked.

He smiled broadly like a child, took a swig from the bottle, and guessed, “aggressors!”

“So it’s stupid to have one, it seems to me. You’re safer without one. Aggression is already against international law.” I said.

He looked several times at the bottle, me, bottle, and me, sat down, and said in the most pathetically Russian voice I could imagine,

I went home to cook a baked potato.