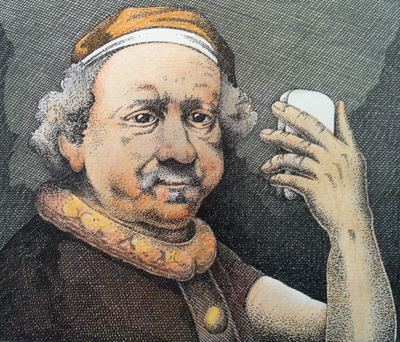 Rembrandt painted more selfies than any other artist in his century, and for many centuries thereafter. Over eighty in all, not including those probably destroyed by angry parents, lovers, ex lovers, or rivals.

Most museums are having nothing to do with the series of selfies, like the partially or fully nude ones sent to Albina Di Albacore, in which he holds a member that resembles a mortadella more than any known part of the human anatomy.

The ones Rembrandt painted hastily, in the rush of sexual interest, often still show his hand extended, just as in a modern selfie. In those he painted with less sexual passion, the extended arm is always painted out, So that it resembles a classic portrait, except for the occasions suggestive bulge here and there. Mostly there.

Marquel, invited to a private showing, noticed that the trans-century comparisons are amazing. In one bathroom scene which Rembrandt apparently painted in a hurry (who knew?), you can see an unknown Dutchman sitting in a stall in the background. Rembrandt must have really muttered, “selfie failure,” but he appears to have sent it on, by courier, to the contessa Di Albacore.

In another, the mirror is itself visible. But in a selfie where literally everything else is visible–and ready–it’s easy to excuse Rembrandt‘s recklessness. Another, with a bit more care, was sent to one of his Medici benefactors. Actually, it’s a real work of art, a classic portrait except for a mirror on the wall which reveals Rembrandt‘s bare posterior.

A few reveal Rembrandt clubbing. One shows Rembrandt and his date for the night, a rather buxom Dutch woman who apparently had an aversion to shirts or tops, but not beer. Amazingly two of the others at the bar are out of focus, as if dancing.  I’d never realized Rembrandt‘s photographic tendency, though he could have moved it up a stop or two. What an eye. I always associated that with Vermeer. And the rest of him completely fills out several of the selfie.

I asked the curator how Rembrandt was able to get away with this kind of lascivious behaviour in what was then a fairly prudish Catholic culture. He pointed me to a small room at the side.”we think that was Rembrandt‘s insurance policy.”

It was sort of a selfie but took up most of the wall. Rembrandt painted it from the side as if he were holding a camera out far. His arm extends to a hand held mirror, the focus of the picture and it clearly shows one of the Medici women being serviced by three different men, a large pile of clothing at the side of a sumptuous bed.

“That’s the duke’s wife. The three men are easily identifiable rivals to the throne. They never had a chance as long as this picture was safely guarded, and apparently this one was. Remember, they had no negatives then.”

“Didn’t that put Rembrandt in danger?” I asked.

“Probably no more than it would today. Check out these smaller paintings.”

Next to the large tableau were tiny miniatures, each a model of craftsmanship. Each of the images showed incriminating portions of the larger work. Each was terribly wrinkled.

The curator explained, “Rembrandt kept these on his person until he died. When that happened, they discovered the miniatures in his wallet, as well as a condom made of salmon skin. He was quite the dude.”

My view of the Masters has changed. For the better.

By Marquel: Rembrandt, You’re so Vain