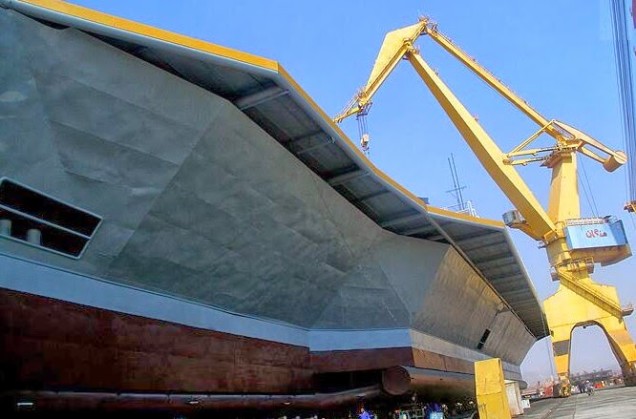 Marquel, TPVs NYTimes Models & Hobbies Section correspondent was flying over a cuckoo’s nest, when he read Iran’s Navy Blasts Away at a Mock U.S. Carrier, and crashed. He had been following this project for the last 12 months.

Marquel had heard that the Iranians were building a full size model of a Nimitz class aircraft carrier and the Defense department accurately portrayed it as a target barge. To show they could close the straits of Hormuz if the U.S.strikes Iran, the Iranians towed this barge into the middle of the strait and sunk it.

Using dozens, maybe hundreds, of watercraft, the Iranians seemed to have a great time shooting at the carrier with its American flags and model sailors running about the deck. The Iranians displayed the effectiveness of some of its newer rockets and a good time was had by all.

Marquel once again visited the Iranian mission and sat down with the staff for an informal discussion.

“Was the point just to warn the U.S.of the consequences of an attack?” Marquel asked.

“Basically yes, but to also test our weaponry, build patriotic feelings, and have a good time.” A consular official said.

“I would think that an army or navy that has fun is better than one, like ours, that just eats up billions of dollars.” Said Marquel.

“Oh yes, and our aircraft carrier just cost a few thousand, not many billions ” he said.

“But that brings up some other things. Your test didn’t include the various defensive strategies the aircraft might have taken. In fact you might never have gotten in range of the real Nimitz.” I said.

“What do you mean?” Asked the aide.

“Well aircraft carriers don’t just sail around, like I do in my rowboat in the summer. They are preceded by countless destroyers, protected by air cover from their own decks, and fed live satellite info. It’s more likely they would have blown all of your boats out of the water before you even took your first shot.” I said, somewhat nervously.

He was angry. “But you can see what our missiles did. We don’t have to be close.” He said.

“It’s at the bottom of Hormuz.” He said.

“Yeah. How are you going to navigate around it?”  I asked.

“There are buoys.” He explained.

“If it were a real carrier it would be burning four weeks and polluting your country.” I noted.

“Smart move.” I said.
He smiled and sat up straighter.
“So you often use mock ups in other situations?” I asked.

“Oh yes it is an Iranian tradition. I think it relates to our famous frugality. We are sometimes called the Jews of the Muslim world.” He clapped his hand to his mouth. Perhaps he had said too much.

“We always use effigies of Bush, Obama, Eisenhower, Carter, JFK. It’s better than burning a real person, say an actor or something. Maybe a Jew.” He said.

“Another smart choice. What about Jackie O?” I asked.

“No never. She was too well dressed. Iranians have great respect for fashion.” He said.

“So why don’t you just make a mock up of an atom bomb instead of real ones? Again, it’s cheaper, less dangerous, and more fun.” I suggested.

“Don’t think we haven’t thought of it. The problem is you or the Israelis eventually counterattack or even bomb it. It ends up being more dangerous.” He said.

“So you would suggest we just let you build your bombs on the assumption they’ll be mock ups and everybody will be happy?” I asked.

“Would you let us inspect the mock up to make sure?” I asked.

“I’m quite sure we would allow you to fully inspect a mock up of the mock up.” He said.

“I don’t think that would reassure us much.” I said.

“Well it should. After all, we feel reassured after sinking a barge with a model on top of it. You should feel equally reassured with a cardboard bomb.” He said.

“What we may do is build a model of the Ayatollah, and of Obama, and hold a summit in Teheran. When people see how well they get along, and after reading their joint communique, perhaps people will feel more sanguine.” He said.

“I have a better idea. Why don’t you put models of all your atom bombs on display, destroy them all, and ask the U.N. to conduct an inspection.” I suggested.

“We could not do that. We use models to make the people feel good. This would make them feel belittled.” He said.

“Well congratulations on your massive destruction of our make believe carrier.” I said.

“Thank you. Thank you.” He said. “And congratulations on having avoided really being sunk.”

“Yes. We were really frightened.” I said.

“We know that feeling well.” He said.

I went home and started my model of a WWII P47.
***
By MARQUEL: To Nimitz or Not to Nimitz