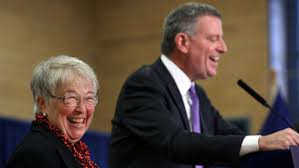 Ms. Fariña enjoys the attention TPV and other media are bestowing on her. Her first suggestion is to have a high school named after our last mayor, “that short funny Italian guy.” Then she excused herself to powder her nose.

When reminded, upon her return, that we already have a high school named after Mayor LaGuardia, she questioned,

“Isn’t that an airport?”

She then excused herself to go powder her nose.
TPV, in an exclusive interview, pointed out that LaGuardia was not our last mayor and that we have had several since him. She said,

Well, he’s the one I remember best. I loved those fireside talks.

TPV asked whether she was thinking of FDR.

“I think of him all the time.” She excused herself to go powder her nose.

When she returned, we said that FDR discussed politics while “the little flower,” LaGuardia, read the comics over the radio.

“I won’t ever allow comics in a school,” she insisted.

TPV asked what about cell phones?

“I think that might be going a bit too far,” was her answer, “prisoners should be able to communicate with their families, but they don’t need phones in their cells.”

Fariña said she planned to reduce test preparation time. TPV agreed that seemed to be a waste of educational time.

“Yes,” she said, “I couldn’t believe the numbers when I read them. Two months for test preparation? We used to run them off the mimeograph the morning of the test. I really don’t understand the problem.”

TPV thought she might be right. What about charter schools? After excusing herself to go powder her nose, she returned to say,

“The church has done a good job.” TPV asked if she wasn’t thinking of parochial schools. “Of course,” she said, excusing herself to powder her nose.

Later, we asked Fariña whether she really is the third highest paid retiree in the school system, receiving almost $200,000 annually.

TPV noted that was almost the exact amount the last school chancellor received in salary.

“Why yes,” she answered, “I’ve been told that. Isn’t that coincidental! I just love coincidences, don’t you? But now I really have to go powder my nose. Excuse me.”

If you think that the New York Times has a different position on De Blasio’s choice for Schools Chancelor, go to http://nyti.ms/1eQUkT9.