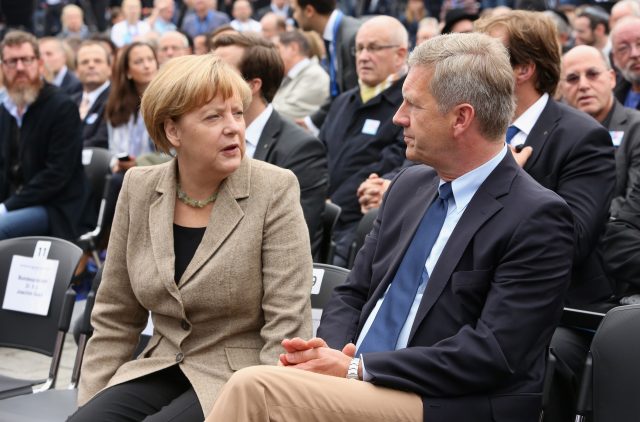 [embedyt]http://www.youtube.com/watch?v=Xz-UvQYAmbg[/embedyt]Marquel TPVs NYTimes German Anti Semitism Section correspondent was smearing cream cheese on a garlic bagel when he read Germans Rally to Protest Anti-Semitism Over Gaza War. The Central Council of Jews organized the rally in response to the anti-Semitism seen in cities like Berlin after protesters chanting “death to Israel” and “gas the Jews” at pro-Palestinian demonstrations over the summer had deeply unsettled many. This time prime minister Merkel led the parade showing solidarity with Germany’s 100,000 Jews, down from six million in what Merkel calls, “the natural cycle of demographic data.”

In other parts of Germany, Molotov cocktails were thrown at a synagogue, what Merkel calls, “a Germanic and traditional way of showing solidarity with the Jews,” and several Jewish cemeteries were desecrated, according to Merkel, “a great honor to those departed.”
Marquel noted that this was somewhat counter historical because all over Europe a certain hostility was manifested towards Jews, although separating this from disagreement with Gaza policy is a bit difficult. Marquel, with the help of Mufi, took the SST (an unscheduled and unannounced flight because in theory, the SST has been grounded and out of service since the crash at CDG many years ago) and arrived actually two years younger than when he took off.
In Berlin, Marquel visited the Ministry of Religious Affairs and Dalliances.
“What’s the next step going to be in this new ‘love the Jews but not their sin’ initiative?” I asked.

“First all antisémites will be required to wear a badge showing the Jews killing Jesus.” He said.

“Isn’t that playing into their hands?” I asked.

“We hope the shame will deter others.” He said.

“What else?” I wondered.

“We are then going to transport all of them to camps on the Polish border.” He said.

“Which side of the border?” I asked.

“Unfortunately, the Polish side ” he said.

“How will you manage that?” I questioned.

“We hope they will cooperate. If not, we will have to move the border just a smidge. There’s historic precedence for that.” He asserted.

“We think this will do a lot of good.” He said.

“Several measures. We will have weekly book burnings where we will collect anti-Semitic publications and have bonfires in all the towns of Germany.” He said.

“Book burning is rather a strong statement. I think Jews might be offended.” I said.

“Offended is not the worst thing in the world,” he said, “plus it’s only one measure. We are going to expel all antisémites from universities, from government service, and the armed forces. We are going to cleanse our society. Also all professional licenses held by antisémites will be revoked.”

“What about this synagogue that was almost destroyed by Molotov cocktails? Isn’t that really a stereotypical act of anti-Semitism?” I asked.

“We don’t think so. It happened so often in our past, accompanied by celebrations and gaiety, we think it’s lost its political significance and has simply become a way for Germans to show social solidarity. I wouldn’t be surprised to find many Jews in the crowd throwing Molotov cocktails.” He asserted.

“You think so?” I wondered, “and the desecration of Jewish cemeteries? You can’t suggest that isn’t anti-Semitic.”

“Oh but I do,” he protested. “There are very few Jewish monuments left in Germany aside from cemeteries. Germans who want to show solidarity with Jews have few other alternatives. It’s like going to the Vietnam memorial wall in Washington.”

“So what do you call this initiative?” I questioned.

“There was some debate, but we settled on The Final Delusion. What do you think?” He asked.

“Apt, very apt,” I said.
I flew back to JFK on the secret SST. I ended up the same age as I started. I began to groan with each step I took.
***
BY MARQUEL: The Final Delusion