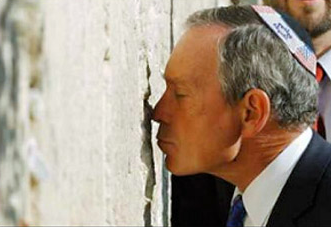 Marquel, TPVs Times Simple Courtesy correspondent, was recently staying at the King David Hotel when he read in the Hebrew version of The New York Times, that Bloomberg Wins a $1 Million Prize, and Then Gives It Back. The question was never whether he would keep the Genesis Prize money, but to whom he would give it.

Bloomberg is rich beyond anybody’s reach. So, everybody expected him to give his gift to someone else. The rich are not like you and me, thought Marquel, they’re rude. Now it’s true that during the holiday season some of us may re-wrap that cut glass bowl and give it to Mom. But it’s the holiday season and more importantly we don’t say,

“Here mom, Uncle Stanley gave us this and it’s ugly as hell so we thought you’d like it.”

That’s why we re-wrap it. To fool her and make her happy.Not Blomberg. No re-wrapping.

Here, you take the million, I’ll take the tax deduction.

Marquel was embarrassed and ashamed of this nouveau behavior. But not surprised.I went over to the track where his daughter rides horses. She was all mounted up and full of “giddaps” as she went around the rink so I had to run after her as I asked questions.

“Oh, daddy is always like that.” She said. “He never likes what we give him. He gives it away to whomever is around.”

“What do you mean whomever?” I asked. “Like a bum in the street?”

“Certainly. If there’s one around.” She said, as she jumped some posts and I leaped after her. “Last year I gave him a tie, Vuitton, for his birthday. He held it in his hand, didn’t say thank you, just put it on this bum, tied a nice knot for him, and says, ‘this’ll look good on you.’ “

“Are you saying he gives every present away?” I asked.

“Every last one. Doesn’t even re-wrap.” She assured me.

“That was my next question,” I said panting. “Thanks for the interview.”

I called the King David Hotel in Jerusalem, asked them to put my bill on Bloomberg’s account and continued talking to the desk clerk.

“He’s  all right but he doesn’t take to VIP treatment. On arrival he gave the flowers and fruit basket to other people on the floor. He was going door to door and most people thought he was a crank.” Said the desk clerk.

“He’s a billionaire.” He answered.

“A billionaire crank.” I said.

“Anything else?” I asked.

“Well, we comped him on a super king sized bed.” He said.

“He spent all day disassembling it, missed several meetings, and reassembled it in an adjoining empty room.” He said.

I hung up and flew back to NYC, and went directly to City Hall.

“I heard,” I said, “that mayor Bloomberg left us in debt.”

The finance clerk said, “It’s true. He didn’t remake the contracts with the unions so we ended up with retroactive debt for raises in the billions.”

“That’s pretty stupid for a businessman.” I observed.

“Well he started several times but whenever he got to a give back provision he’d ask if he could give it back again and of course that’s impossible.”

“Any other reasons?” I asked.

“Well he didn’t like to accept money from the state legislature. Whenever Albany gave us funding, he’d send it back. Sometimes he’d send it back to the wrong person or office. We once got an unexpected billion for child care and he sent it to the Metropolitan Museum of Art.”

So I asked El Al to fly me back to Israel as a guest of Bloomberg and I further investigated this one million dollar prize.

“He wouldn’t take it,” said the foundation manager, “but eventually we forced the envelope into his hand.”

“Only momentarily. He passed a hummus stand and gave it to the owner. Even took the time to endorse it.” He said.