Marquel, TPVs NYTimes Restaurant and Subway Busker Section, was staring at a fine lady picking her teeth with a Vuitton toothpick, when he read Perry Says Terrorists Could Be Entering the U.S. From Mexico.  The Texas governor said that while there was no clear evidence of terrorists sneaking across the border, security there must be increased using drones and additional personnel. To the contrary, Marquel knew far better than this Texas Perry exactly who is sneaking across the border. 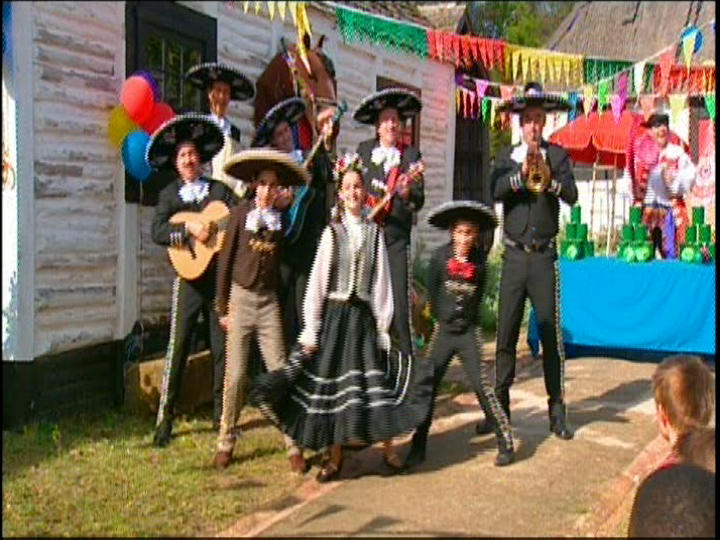 This week alone 9 Mexican illegals were hired as chefs or sou chefs in 7 East Village restaurants. Three are French, three are Italian, and one is a fusion Thai-Peruvian eatery that just opened its doors. In addition to that, 12 other Mexican illegals arrived and started playing the same song (Cielito Lindo) on four different subway lines, the L, F, C, and 1 trains, all dressed in sombreros they bought on 42 Street, and sharing 9 different guitars, playing on different shifts. And all that is just one week.
That might not be terrorism to Perry but that’s because he doesn’t have to listen to the same rendition of Cielito Lindo on both his morning and evening trains. Assuming Perry knows how to take a train. Marquel wasn’t sure whether the people in charge knew where all of America’s buskers and chefs come from.
So I went downtown and spoke to the border patrol. We have an office because we are a border town. Actually a border port.
“Do you understand how many Mexicans arrive here every year?” I asked.

“As many as 50,000.” He said, in a sort of angry tone which I didn’t take personally because it sounded habitual and very much how he looked. He wore a Smokey bear hat but I didn’t laugh. At first.

“Are they a terrorist threat?” I asked.

“We don’t know who they are. They could be anyone.” He asserted.

“I understand your point,” I said, “but couldn’t we say that about everyone in this entire city? They could be anyone. We don’t know who they are.”

“But we don’t know what these Mexicans are planning.” He said.

“I know what they’re planning,” I said.

“You do?” He said, standing up, I think to give me the sense that he was in charge.

“Don’t you think you’re simplifying away a serious national security issue?” He asked.

“Well, that’s possible,” I remarked, “but only if they try something like Au Claire de la Lune, or maybe Hatikva. You don’t have any intelligence indicating such a drastic and painful switch do you?”

“I can’t reveal intelligence,” he said, looking at some manila folders tightly held to his chest.

I was in one of my highly inadvisable frisky moods, so I asked, “why not? Everybody else does.” But when I saw what looked like smoke drifting off the top of his hat, I immediately said, “just kidding of course. This country needs people like you who know what secret means. “
I leaned over his chest anyway and asked, “is there any mention of song titles in there?”

“I don’t believe so but if there were I couldn’t tell you anyway.”

[embedyt]http://www.youtube.com/watch?v=rKYa40SaO7E[/embedyt]”I just don’t see the terrorism in singing Cielito Lindo all day to the same arrangement. It can be highly annoying but that’s not terrorism, is it?” I asked.

“Not by itself, but we’ve had A-rabs building bombs while singing from the Koran. ” He said.

I thought for a while and laughed at his hat but he didn’t know it and said, “but not on the F train, right?”

“It’s not funny,” he said, and I was ready with an answer but decided to save it for good bye.

“You’re right of course. It’s just a funny image. Now these illegal cooks could poison us. Is that’s what you’re afraid of?” I wondered.

“I can’t reveal that.” He asserted.

“But they’re all so committed to sending a few hundred dollars a week back to Mexico that poisoning their clients would be counterproductive, wouldn’t it?” I asked.

“That’s not a good attitude for intelligence gathering.” He said. I looked confused, I’m sure, so he added, “it assumes away the problem before you’ve even investigated.”

I pointed my finger at him and said, “good point.”
He sort of smiled.
“I’d keep my eyes on them. If they start cooking, say, halal knishes, or kosher lobster, I would look into it. That could be the cover for bomb making.”

“Believe me,” he insisted, “nothing escapes our attention.” He hadn’t a clue what a knish is nor did he even know what halal or kosher means.

He led me out the door in an excessively patronizing way, so I stabbed his stomach with my finger as he said good bye, and told him, “Remember, only you can prevent forest fires.”
It looked like one had started again in his hat.
***
BY MARQUEL:  Amigos Imaginarios de Perry