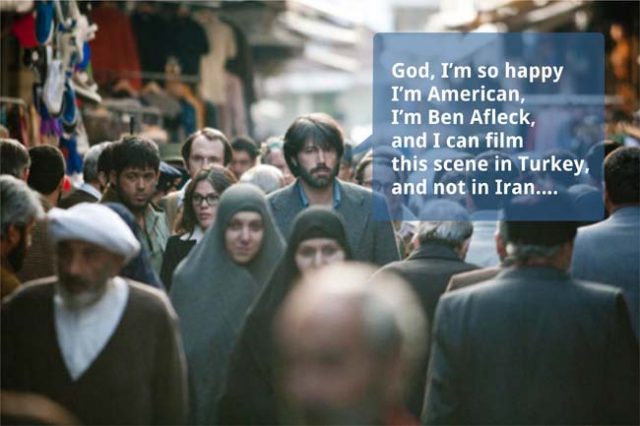 Even after three great movies, I find it difficult to use the qualifier “film director” after Ben Afleck‘s name. I mean, look at him! Ordinary directors are fat and bald. Or, to paraphrase Jerry Sienfeld doubting George’s architect “look”: I don’t see film directing coming out of Ben Afleck! And yet, it is coming out just fine. Guess the lucky bastard really got it all! And, frankly, these days, film directing comes out more naturally from Ben Afleck, than from the more experienced Sam Mendes (yes, I think Skyfall is crap).

Argo is one of the best pieces of suspense-spy-drama (we can also add “comedy” thanks to Goodman and Arkin) that hit the big screen this year, making the moviegoers’ year better just before the end of the world, or the end of the Mayan calendar, whichever comes first.

And talking about the end of the world, such an outcome puts this excellent movie in a different perspective. What if this is the last movie ever to be made about the C.I.A., Hollywood and, symbolically speaking, about America?

How does it feel thinking that millions of years later, the civilizations following ours (if any) discover this movie, and upon watching it believe that America, meaning the United States of America, was a country inhabited by wonderful peaceful heroes, whose only existential problems were the threat posed by something called “the Iranian lifestyle”?

How would you feel about such a future occurrence? Does its mythical proportion make you uncomfortable?

Don’t worry, I do not care about its veracity, or lack of, that is Affleck’s business. However, you have to recognize that I am raising an interesting question.

Fortunately, Affleck or just Argo has an answer to this question, too. As Alan Arkin put it in one of his memorable scenes, the answer to complicated questions is: “Argo fuck yourself!”

To which I add: good night and okeydokey!

Argo: The Tough Answer to a Tough Question