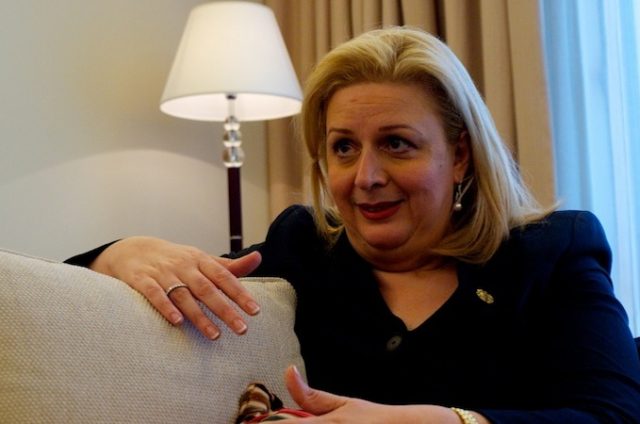 Suha used to be a 20-something blond-died woman of little consequence until mid 1990s when she accepted to deliver Yasser Arafat, then the leader of the P.L.O., a daughter. This act of female charity matched only by Michael Jackson’s personal nurse, curbed rumors of Arafat’s homosexuality and lifted him from terrorist to honorable husband. Suha’s charity did not come cheap.  She has continued to live in Paris, whether as Arafat’s wife or widow, and the $22 million dollars-a-year the Palestinian Authority pays Suha since Arafat’s death in 2004 proves that the secret surrounding the birth of Arafat’s daughter is as newsworthy as the birth of Jesus.

But, this is old water under the bridge, though I tried to put a new spin on it.

What is interesting is that Suha has held onto Arafat’s death bed pajamas for eight years. Who do you know doing something equally stupendous? If you said Monica Lewinsky, you won. Monica also held onto Bill’s sperm spread on her dress to prove intimacy. Monica is getting her $12 million-book-deal just now.  Suha, remarried to the brother of the Tunisian’s ex-president, is either in need of more money or is the object of some blackmail. What is obvious is that Al Jazeera is willing to pay for a good story which would kill any peace prospects in the region: what if the Israelis poisoned Arafat in Paris, France? And Suha pocketed the money? Was she unwillingly working for the Mossad, too? The latter two questions are ours, not Al Jazeera’s.

From a photogenic perspective, Suha is as pretty as Monica will be at Suha’s age, but the Al Jazeera interview humanized her in ways that this expose of her greediness did not. BBC tried to stay neutral.

Dear Suha, ThePotholeView wishes you in all sincerity “Way to go, girl!”