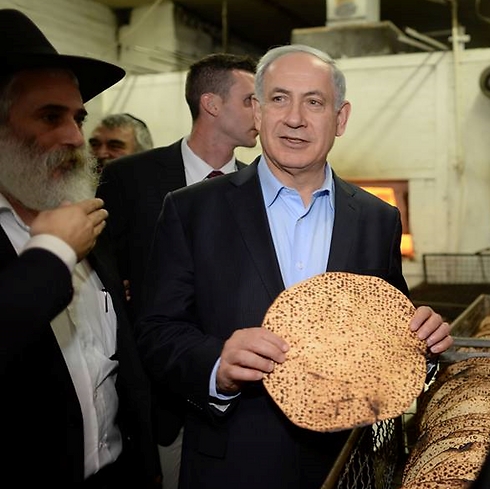 Marquel, TPVs NYTimes Fool Me Once Section correspondent, was refusing to eat to see how much weight he can lose in one half hour, when he read Israeli Response to Iran Nuclear Deal Could Have Broader Implications. Though Israeli and American officials have long denied any linkage between the Iranian and Palestinian issues, the two are playing out simultaneously.

Passover is not always a happy time for Israeli Jews. Matzo, matzo, matzo. It has serious digestive implications and most Jews walk, or limp, around with dour expressions, looking for a toilet. In fact the Hebrew word, Pesach, does not mean to pass over (which is what Good did to the Jews instead of kill their first-born), but literally means “enema,” the supply of which in Israel frequently is depleted before the last box of matzo leaves the local grocery store.

The military is always on high alert this week. A smart Arab would choose this week to find an already defeated enemy.

That’s why it was so conspicuous to see Bibi Netanyahu in his yard, trimming new  crocuses and generally kidding around. What was he so happy about? Marquel stood outside the Netanyahu home and watched Bibi on his knees, cutting green leaves and smiling.

He noticed and said Shalom to which ever-prepared Marquel answered, “gut yontif,” Yiddish for, “I am Jewish,” or “Happy holiday” depending.

“You are American?” Said Bibi.

“Why not? This is Israel, my people are safe, the sun is shining, we are free again!” He said.

“Yes but a few days ago you were lamenting that Iran would wipe you out because of Obama’s shenanigans.” Said Marquel.

Bibi raised his hands, and one garden trimmer, to the sky and said, “Why rehash old squabbles among friends.”

“Well because you don’t seem like a man afraid that you’re about to be destroyed by a bunch of oppressed Persians.” I said. He was silent.

“I’m beginning to think of Brer Rabbit, you know what I mean?” I queried.

“I know the folk tale but I don’t follow you.” He said, seeming suddenly on edge.

Bibi put his hands out sideways, indicating lack of understanding.

“Yes you look pretty happy. I think maybe that was a show cooked up by you and Obama to get this treaty through.” I said.

“That’s really not much time.” He said.

“I have to agree. But it seems workable. But there was an even bigger benefit by your crocodile tears over this treaty.” I urged.

“What’s that?” He asked, seeming mad I’d damasked him.

“You only have to watch Iran now. Without a treaty, Syria, again, and Egypt and Iraq and even Jordan might be starting their own nuclear races. You couldn’t deal with that, could you?” I asked.

“I have to admit that is our nightmare.” He said.

“So how’s the briar patch?” I asked him.

“Zeh tov. Rabah.” He said, saying it was really good in that briar patch, even though he’d been dragged there, but that’s what briar patches are for.

“Got enough matzo?” I asked.

“Any matzo is enough matzo,” he said.

“Well, thanks for covering for us. It worked.” I said.

He winked. I left feeling good about the world. Pesach and Easter together. A good sign.