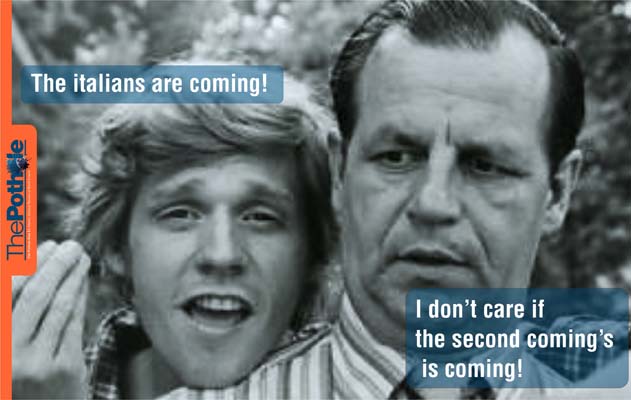 The Renaissance is a gift Italians gave us all when, in a gesture of largesse, they broke away from tradition, from the Miserable Middle Ages.  But since then, the Italians have refused to break away from anything… except a sinking boat.

The Italians did not break away from Silvio Berlusconi, their conservative prime-minister. Silvio, whose legal battles encompass so many serious and petty crimes that engaging in prostitution with a minor comes across as one of the least offensive, broke away from them when he resigned.  Italians don’t even want to think about breaking away from the Pope, even though the Papal institution remains as politically astute as our Republican presidential wannabes.

More recently, Italian news has been bursting at the seams with images and sound bites of Francesco Schettino.  Schettino is the 52-year-old captain who ran his luxury cruise ship onto a Tuscan reef last week, and unlike other Italians, broke away from it all too fast.

To many, Captain Schettino is a coward who sought safety before the women and children could.  To others, he is a regular Italian playboy who drives ships like Ferraris.  I bet though he would only abandon his Ferrari if in danger to explode. The official account of his recent abandonment is far less honorable. It states he ran away ahead of his passengers and crew members.

Schettino disagrees with that account, and he is not alone.  His dining companion, a 25-year-old former dancer for the cruise but a guest at the unlucky time, has developed her own version of the facts. It says that they both engaged in rescuing the passengers. It deos not mention that it happened after she and the Captain had had a full-course dinner, with the desert served nearly an hour after the initial collision with the Tuscan soil1].  She explains her unexpected Good Samaritan role as due to her “experience of working on cruise ships and knowledge of Russian.” [2]

Finally, her account puts him on the deck of the cruise ship at 11:50 PM, because she says then the captain directed her to leave with the next life boat.  It remains unclear whether he accompanied her into that boat like a true gentleman, or whether he himself tripped and fell into it, because the ship had suddenly listed 70 degrees.

All this reminded me of the 1979 coming-of-age movie, Breaking Away.  It’s about the protagonist, Dave, living the last summer of his boyhood training for a mythical bike race against an Italian team.  For Dave, the Italian athletes represent the acme — that amazing something that life will give us all one day, if lucky.  For the sake of this story’s ending I will presume that the young cruise dancer believed Schettino was her life acme too, if for no other reason, than the fact that he came from papal Italy and she from Moldova, a landlocked state that is the illegitimate child of Romania and Mother Russia.  As about us…  We are all waiting for a new Renaissance-acme.  And it may come one day, but there are no signs it will be an Italian Renaissance.