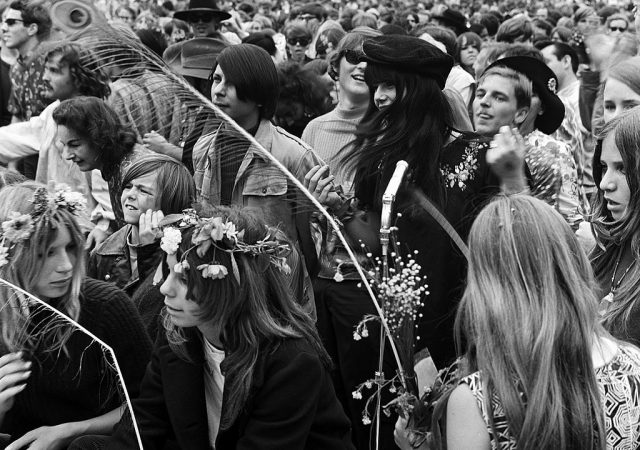 Summer of Love retrospectives have an obvious appeal. As we listen or read, marvel or gawk, half a century on, septuagenarians get to feel warm and fuzzy, sexagenarians get an afterglow, and their children and grandchildren get to feel smug at how sweet, innocent and silly some people (white people, anyway) used to be.

The soundtrack cues itself as Scott McKenzie eternally advises, “If you’re goin’ to San Francisco/Be sure to wear some flowers in your hair,” lyrics written by John Phillips of the Mamas and the Papas in a hit record released in May 1967 as a sort of advance trailer for the Monterey Pop Festival, which the group and their producer, Lou Adler, would produce in June just three hours south of the Bay Area.

The Summer of Love was a media event from the start, which isn’t to say it didn’t happen. “Huge Invasion” was the San Francisco Chronicle’s front-page tag, set above “HIPPIES WARN S.F.” in gigantic letters. Monterey Pop in June was certainly the greatest assembling of pop musical talent to that date. D.A. Pennebaker’s film, released the following year, pours out such a cascade of greatest hits — Jefferson Airplane, Jimi Hendrix with his guitar flambé, The Who, Janis Joplin, Otis Redding and for a touch of the other side of the planet, astoundingly, Ravi Shankar — as to send even the most sardonic observer in search of the word “awesome.” When a blues wail (“Ball and Chain”) rips out of the throat of Janis Joplinlike a sonic volcano and Pennebaker cuts to a shot of Cass Elliott of the Mamas and the Papas, sitting in the audience, as she mouths the single word “Wow,” we are in the presence of something more than a social phenomenon — we are momentarily present at what looks like, sounds like, smells like the spirit of the ‘60s incarnate, the promise of some hitherto unmined, unsuspected depth of heart.In truth, no one knows how many teenagers hitchhiked and caravanned their way across the country to sample the aura, the sunshine, the controlled substances and fever dreams of the Haight-Ashbury neighborhood adjoining Golden Gate Park that summer. Perhaps 50,000, perhaps 75,000 all told, but no one was conducting a census. Still, such numbers would have inflated the population of San Francisco by some ten percent. The rock concerts were teeming and the tie-dyed colors were streaming. The warnings about incoming barbarism caroming through the straight press only inspired more invaders — and criminal gangs foisting amphetamines and God knows what else on the unwary. Probing journalists found that many of the kids were runaways.

Of the mainstream reporters, only Nicholas von Hoffman of The Washington Post caught the true ambiguity — and the darkness — in a series of profiles later gathered in book form under the title We Are the People Our Parents Warned Us Against. Amid the drug tourism and inhospitable police, there were bad trips, criminal gangs, rapes. That spring, local leafleteers were already warning how commonplace rape had become, committed by some of what they called “Uncle Tim’s Children” (for Leary, the pied piper of LSD) against others:

Rape is as common as bullshit on Haight Street. Kids are starving on The Street. Minds & bodies are being maimed as we watch, a scale model of Vietnam [where 448,800 American troops were posted]….Are you aware that Haight Street is as bad as the squares say it is?

But America in the summer of 1967 was even weirder, more menacing, more apocalyptic than the flower children of the Haight-Ashbury knew or wanted to know. The national weirdness was not all of a piece, though radicals strived mightily to put together a unified mental picture of everything crazy and brilliant that was happening, as if the utopian hope and the ghetto devastation were the Yin and Yang of the same puzzle. While the hippie effusion was casting its ambiguous spell on the West Coast, the ghettoes were boiling. First Newark burst into flame and broken glass; 26 died, 1,400 were arrested. Then, a few days later, Detroit, where by the end 43 people had been killed, most of them black; 1,189 injured; 7,231 arrested; 2,509 stores looted or burned. President Lyndon Johnson, invoking the Insurrection Act of 1807, deployed 4,700 paratroopers from the 82nd and 101st Airborne Divisions, which had fought in Vietnam.

Newark’s administration wrote in applying for federal money in April that, among major cities, Newark

has the highest percentage of substandard housing, the most crime per 100,000 people, the heaviest per-capita tax burden and the highest rates of venereal disease, new tuberculosis cases and maternal mortality.

No one has better described what happened in Newark beginning July 12 — and how the inferno developed from long-suffering years of injustice — than Junius Williams, then a Yale Law student and community organizer for the Newark Community Union Project (NCUP), launched by Students for a Democratic Society. So I’m going to leave the devastating description to him, to which I will add only some details from NCUP organizer Tom Hayden’s contemporaneous account. It’s important to read such accounts to get the texture of life in a place like Newark at the time: the routine police brutality, the pent-up rage, the blinding sense of we’ve-had-enough, the evocation of a community in rebellion, not always acting wisely but acting. Here is Hayden:

As if to prove its inevitability, the Newark riot began with an ordinary police-brutality incident against a man with an ordinary name: John Smith, driver of Cab 45, in the employ of the Safety Cab Company. Early Wednesday night, Smith’s cab drove around a police car double-parked on 15th Avenue. Two uniformed patrolmen stopped the cab. According to the police story given to The Star-Ledger of July 14, Smith was charged with “tailgating” and driving the wrong way on a one-way street. Later they discovered his license had expired. The officers charged that Smith used abusive language and punched them. “They only used necessary force to subdue Smith, the policemen asserted.”

This “necessary force” was described more fully by Smith at his bail hearing on July 13. “There was no resistance on my part. That was a cover story by the police. They caved in my ribs, busted a hernia, and put a hole in my head.” Witnesses on the stoops saw Smith dragged, paralyzed, to the police station. Smith was conscious, however: “After I got into the precinct six or seven other officers along with the two who arrested me kicked and stomped me in the ribs and back. They then took me to a cell and put my head over the toilet bowl. While my head was over the toilet bowl I was struck on the back of the head with a revolver. I was also being cursed while they were beating me. An arresting officer in the cellblock said, ‘This baby is mine.”‘

It was about 8 o’clock. Negro cabdrivers circulated the report on Smith over their radios. Women and men shook their heads as they stood or sat in front of their homes. The word spread down 17th Avenue west of the precinct, and across the avenue into Hayes Homes. Called the “projects” by everyone, Hayes Homes was erected in the wake of “slum clearance” in the mid-’50s. Each of the six 12-story buildings holds about 1,000 people. People know them as foul prisons and police know them as “breeding grounds” for crime. As the word spread through Hayes Homes, people gathered at the windows and along the shadowy sidewalks facing the precinct.

What was unusual about John Smith’s case was the fact that the police were forced to let respected civil-rights leaders see his condition less than two hours after the beating. The police were trapped and nervous because they had been caught by civil-rights leaders whose account could not be discredited. A neighborhood resident had called several of these leaders — including activists from CORE, the United Freedom Party, and the Newark Community Union Project — minutes after Smith was brought in.

After they had a heated argument about Smith with officers in the precinct, an inspector arrived from central police headquarters and agreed to let the group see the prisoner in his cell. “Don’t listen to what he says. He’s obviously upset and nervous as you might expect,” the inspector told the group. The group was incensed after seeing Smith’s condition. They demanded that he be sent immediately to the hospital. The police complied, while others searched for witnesses, lawyers and members of Smith’s family.

It was at this point that witnesses who were in the precinct house say the police began putting on riot helmets. None of the activists felt there was going to be an explosion, and none remembers a crowd of more than a hundred in the street at this point.

Fathers and mothers in the ghetto often complain that even they cannot understand the wildness of their kids. Knowing that America denies opportunity to black young men, black parents still share with the whites the sense that youth is heading in a radically new, incomprehensible and frightening direction. Refusal to obey authority — that of parents, teachers and other adult “supervisors” — is a common charge against youngsters. Yet when the riot broke out, the generations came together. The parents understood and approved the defiance of their sons that night.

Hayden was a bit too giddy about the prospects, although he included this caution:

This is not a time for radical illusions about “revolution.” Stagnancy and conservatism are essential facts of ghetto life. It is undoubtedly true that most Negroes desire the comforts and security that white people possess. There is little revolutionary consciousness or commitment to violence per se in the ghetto. Most of the people in the Newark ghetto were afraid, disorganized and helpless when directly facing automatic weapons. But the actions of white America toward the ghetto are showing black people that they must prepare to fight back. The conditions are slowly being created for an American form of guerrilla warfare based in the slums. The riot represents a signal of this fundamental change.

Junius Williams’ testimony is quite some confirmation:

It is hard to explain to anyone who was not there the climate of resistance in the streets during the 1960s. People organized to withhold rent from landlords who overcharged for slum properties; they demonstrated against welfare bureaucrats who punished their clients for violating the “man in the house” rule, which said families could not get public assistance if there was an able-bodied man in the household. People boycotted retail merchants who sold bad meat and schools that failed to properly educate children. People demonstrated against poorly managed, overcrowded public housing, and against rampant urban renewal that gobbled up residential neighborhoods without providing adequate replacement housing. And of course, they spoke out against police brutality.

If you were in the ghettoes of Newark, Detroit or scores of other cities that summer, you were not wearing flowers in your hair. Forget about utopia: You were staking out, in action, fury and bitterness, whether well- or ill-considered, a claim to citizenship in an America that seemed a million miles from justice and heading the wrong way. You were wondering how on earth America could ever find its way to decency. You were holding your breath.

Todd Gitlin is a professor of journalism and sociology and chair of the Ph.D. program in communications at Columbia University. He is the author of 16 books, including several on journalism and politics. His next book is a novel, The Opposition. Follow him on Twitter: @toddgitlin.
***
Gitlin’s HISTORY:  Summer of Love and Rage