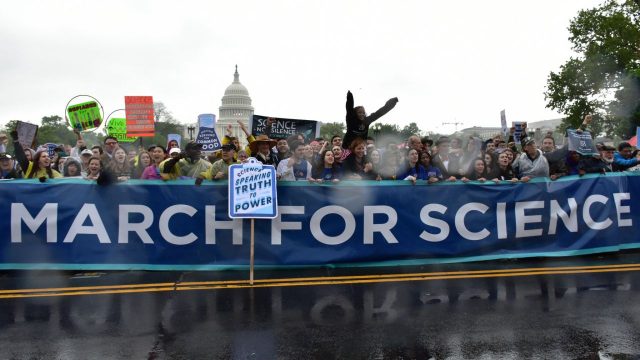 CNN and Fox News Use the Same Climate […]

Thousands of scientists and their allies marched around the world in defense of scientific research on Saturday, but the right-wing crackpot media didn’t see fit to interview any of them.

Rather, in “covering” Saturday’s vast marches for science, Fox News and CNN both turned to a physicist named William Happer, who has found a niche as well as a hearing from the denier-in-chief in the Oval Office, and has said he would take the job of White House science adviser if it were offered to him. Happer has retired as a physics professor at Princeton, but in the eyes of Fox, firmly riveted to their dogmas, he remains a “Princeton professor.”

Fox News’ interviewer said to Happer, “I’m wondering what they [the marchers] have wrong.” Happer replied: “Most of them don’t know any science. It’s sort of a religious belief for them.”

Now, how Happer knew what most of the marchers knew and didn’t know was not clear, any more than it was clear to Trump-loving blowhard Alex Jones that the marchers were “anti human, globalist useful idiots” who, unlike patriotic sports fans, left “mountains of trash” around Washington.

To Happer, the 97 percent of climate scientists who affirm that climate change is caused by human activity are mistaken. He who has never conducted any research on the subject feels entitled to trash those who have done so, and Fox News, which knows as much about science as Roger Ailes and Bill O’Reilly know about women, cheerfully books him. Is this the old Fox News or the new one? I lose track.

On another occasion, Happer told The Guardian that climate scientists are a “glassy-eyed cult.” He was more muted on Fox News, saying that those who worry about human-caused climate change are addressing “phantom problems.”

CNN gave him a chance to trumpet one of his pet themes: heralding the wonders of carbon dioxide, calling it “a perfectly natural gas. It’s just like water vapor. It’s something that plants love.” There he was “balanced” by activist May Boeve and “science guy” Bill Nye. (Were no climate scientists available for the green room?) On another occasion, availing himself of the hospitality of Rupert Murdoch’s Wall Street Journal editorial page, he declared his affection for carbon dioxide in the atmosphere, considering it

a boon to plant life…. For most plants, and for the animals and humans that use them, more carbon dioxide, far from being a “pollutant” in need of reduction, would be a benefit…

Original as it may sound, bring-on-the-CO2 is an old theme for climate doubt-mongers, running back to the early 1990s, and no better defended today than before, when it was promoted by the Western Fuels Association to fight back against the United Nations Framework Convention on Climate Change, which committed the signatories, including the government of the United States, to prevent “dangerous anthropogenic interference” in the climate system.” Then too, as the science historian Naomi Oreskes wrote, the deniers’ intended to create “the impression that global warming was the subject of active scientific debate, so a crucial component was the use of scientists as spokesmen.”

Those cherry-picked scientists were artists of distortion and exaggeration. For fossil-fuel industry propaganda, they were the most useful of idiots.

And so on down to Happer, who is no slouch at metaphor, having said: “The demonization of carbon dioxide is just like the demonization of the poor Jews under Hitler.” If he gets the White House job, he can have some rollicking conversations with Sean Spicer.

No matter that Happer’s specialty is atomic physics, not climate. Indeed, here is how Happer introduces himself on his Princeton faculty page: “I am interested in the physics of spin-polarized atoms and nuclei, and in the application of these spin-polarized systems in other areas.” Like spin-polarized professors, perhaps. But the crackpot media find it convenient to equate all scientists as soon as they find one who fits the help-wanted description. Their principle seems to be: In the dark, they are all the same.

So, too, Fox News’ second-tier go-to guy, Michael Guillen, who was given op-ed space on Fox News the day before the march. Guillen holds a Cornell doctorate in theoretical physics, mathematics and astronomy, and subsequently was a science editor for ABC News. According to The New York Times’ late media reporter David Carr, writing in 2003, Dr. Guillen once approached Fox Entertainment with a story about human cloning by a company, Clonaid, owned by what other Times reporters called “a religious sect that believes space travelers populated earth through cloning and that humanity’s mission is to clone.” Carr wrote that Guillen was offering an exclusive, and that he had approached

“other news divisions and cable companies as well, including ABC, NBC, CBS, CNN and HBO, media executives said. An executive at one network said the offer, which would have given his network little editorial control and would have meant significant payments to Dr. Guillen, was ‘not the way we do things.’ The executive said the proposed exclusive documentary about the process of creating the first human clone was offered for a price in the ‘low six figures.’”

This, Guillen said, was normal freelance activity. “That’s what freelance reporters do every day of the week,” he said. “I have to earn a living. What’s wrong with that?” Subsequently, he backed away from Clonaid, suggesting the clone scheme might be “an elaborate hoax.”

Guillen, in his Foxnews.com piece, writes: “I can’t bear seeing the organizers and partners of the so-called March for Science trying to politicize” the scientific method. He has the gall to claim, as a hero of contrarians who fought against the establishment’s settled science, Albert Einstein.

Just as there is no Planet B, as many March for Science signs pointed out, it is the height, or depth, of intellectual dishonesty to feature the scientist who matches your prejudice and ignore the arguments of the vast majority.

Scientists construct hypotheses and evaluate them. They make mistakes. (Einstein made some too.) They also correct them. The whole community of science is the authority, not the individual. Unlike unthinking ideologues who preserve their dogmas solidly in cold storage, impervious to revision, scientists revise. That’s their business. They come up with models on the basis of plausible ideas, match them against evidence, and, when evidence suggests doubts about theory, search for better theory. But so-called conservatives are not so discriminating.

Just as there is no Planet B, as many March for Science signs pointed out, it is the height, or depth, of intellectual dishonesty to feature the scientist who matches your prejudice and ignore the arguments of the vast majority. Science is, to put it mildly, complex, so it is not surprising that among the legions of deep-pocketed fossil fuel companies and climate-change deniers there are a few dissenters who hold Ph.D.s. Scientific ignorance today is so widespread, and knee-jerk doubt so chic and widely promoted, that the nature of science as a self-correcting, collective enterprise is obscured.

The consequence of such dishonesty is not benign. In 1987, a Berkeley molecular biologist named Peter Duesberg published a contrarian article in a scientific journal arguing that AIDS was not caused by the HIV virus. The virus, according to Duesberg then and in subsequent articles, was a harmless hitchhiker on the actual causes, namely (1) illegal recreational drugs used by gays, and (2) antiretroviral drugs that had been introduced to fight AIDS. Although the overwhelming consensus among biologists was that HIV was indeed the cause of the disease, Duesberg’s cause was taken up by a few other scientists. It was also taken up by right-wing promoters, and also, paradoxically, for a while, by some gay activists, although Duesberg had said that the AIDS epidemic was “caused by a lifestyle that was criminal 20 years ago.” Poking around on the internet, South African President Thabo Mbeki came upon Duesberg’s work, with the result, according to the journal Nature, that

In 2000, Mbeki put Duesberg on a panel of AIDS advisers along with several other researchers who deny that HIV is the cause of AIDS. The resultant policies prevented the roll-out of ARV [antiretroviral] drugs in South Africa at a time when the country was in the throes of an AIDS epidemic, with a quarter of the population testing HIV positive. Since then, two studies have estimated that the lack of medication during Mbeki’s administration led to some 330,000 premature deaths.

Thanks to the Republican Party and its oligarch funders, we fall prey to contrarians who think that “they alone” can fix things. Last year’s Republican defense of willful ignorance, “I’m not a scientist,” has a corollary: I’ll tell you which scientists to listen to. (Perhaps this is the ultimate logic of their free-market fantasies.) And on this score, Donald Trump is no outlier: He speaks for his party’s intellectual brutality.

No wonder scientists the world over took to the streets on Saturday — partisans not of a party but of reason. Which makes all the difference.

Thanks to Naomi Oreskes and Aryt Alasti for assistance.