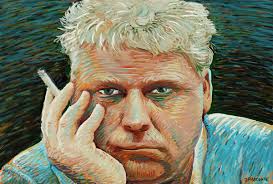 It is with deep interest that I read how some people of Allah enlist themselves to kill cartoonists. And I wonder: why?

Why do people who read the Quran day and night, and probably know it by heart ready themselves to give their life in exchange for a cartoonist’s? There is nothing about painters, cartoonists, writers or artists in general, in the Quran. I just checked. There are five entries about money, and all of them are money paid for someone having been killed. It seems to me that the Quran is okay with this social hierarchy: someone is killed and someone pays the family of the one who was killed. Of course, I am missing the point–that blood-money is only paid by a tribe member to another tribe member or at least someone who has accepted the covenant.

So, why do the Saudis like to pay poor believers in Allah to kill cartoonists and other visual artists?  Theo van Gogh died, we are told, for a movie he made. Another cartoonist barely escaped with his life in an assassination attempt in Copenhagen. Shall I mention the Charlie Hebdo massacre?

Why do the Saudis, who pay for all this insanity, with the US turning a blind eye, have no sense of humor? A TPV writer opined that they are just stupid. But stupidity is rampant everywhere, and just because a man likes his 100 wives to mourn him while being buried erect is no reason to dislike cartoonists, although understandably a cartoon of that burial would be funny.

But that’s only half of the puzzle. The other half is these poor people who never had anything to lose (thus, in Janis Joplin‘s words, totally free), and ready to kill a name on a list given to them by their masters. Now, in the 13th century, peasants started breaking their pitchforks thinking that they caused their misery. It took them a long time to get a bit sharper.

I cannot predict how long it will take the cartoonophobes to understand that their misery is not caused by cartoonists. I can only tell the Saudis that no one betting on ignorance has won in the long run. So far they seem to be winning, treating their poor believers as killing machines, and everybody else is losing.

Perhaps even more than anybody else the United States of America is losing the most because the world is shrinking and we seem to be left bedding the greasy hags all draped in white (That’s another funny cartoon).