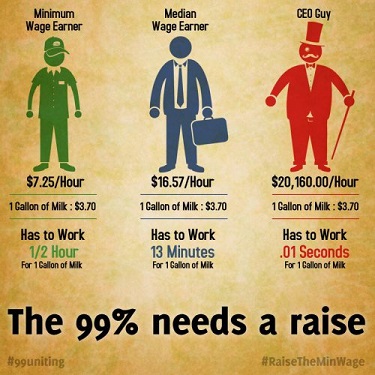 Marquel, TPVs NYTimes Trickle Trickle Boil and Bubble Section correspondent, was talking to his pocket tailor , when he read that States Consider Increasing Taxes for the Poor and Cutting Them for the Affluent.

States Consider Increasing Taxes for the Poor and Cutting Them for the Affluent. Marquel marvelled at the economic genius of the Republicans. Has anyone thought of it before? Perhaps the Romans, but they called a spade a spade. Or, rather, a slave a slave. But the result was the same. Tax the poor. For two thousand years, the secret of a well financed state remained fallow. Even our Nobel honorees are unaware of the secret. I called Nobel laureate Joseph Stiglitz and asked him why he had not suggested taxing the poor as a way out of our economic straits. I never got an answer. Either the phone connection failed or he hung  up on me. I think it was the phone.

The obvious weak link is that the poor have no money to pay but when I called the Republican National Committee, they set me straight.

“But the poor! Nobody has ever suggested raising their taxes!” I protested.

“It’s a well known economic fact that the poor can pay more and when they do, they feel very little pain. Compare that to the super wealthy. You take away their jets and yachts, you’ll see severely depressed and angry people. You take the poor, instead of two to a bedroom, four. Will they notice the difference? Not at all. This is called by economists marginal welfare. The poor have that margin, the rich have none.” He said.

“You’ve got it exactly! Marginal welfare. Keynes and his ilk had it diametrically wrong. To them a rich person doesn’t feel the loss of a hundred dollars but a poor person would. Totally wrong. The rich feel the loss. To the poor it’s just more of the same.” He said.

“So how did Keynes miss that?” I asked.

“I don’t think he was ever poor. The Republicans understand the poor. We recognize their pockets  Not deep but painless. Think about a really deep pocket. A rich person. He doesn’t like your hands way down there in his pants. A poor person with shallow pockets. He doesn’t even notice what you’re doing!” He said.

“You said you weren’t talking about the destitute, just the poor. How do you distinguish the two?” I asked.

“What if they can’t pay? You want them to sell their metrocards, their books, magazines, Fritos, their pants? If not, debtors prison?” I demanded.

“Of course not. If you have assets and you don’t pay taxes, that’s pretty terrible. You don’t see the rich making that argument. Only the poor and Democrats. Sure they can and should sell their assets.” He said.

“And if it’s not enough?” I asked, thinking I had the aha argument.

“Aha!” He said, reversing my point, “let them do what the rich would do. Borrow. They can go to a bank like anybody else and borrow the money.” He said.

“What bank will lend to the poor?” I asked.

“Well we used to have an unlimited number of banks doing that but thanks to the democrats, many have closed down or been bailed out under appalling terms. We’ll bring that back with generous subsidies for banks that service the poor.” He insisted.

“So the secret is marginal welfare, is it? Who came up with this?” I asked.

“A think tank headed by Jeb Bush. They did an historical analysis, especially of the theories during the Reagan years and realized with a little tweaking, we could repair all our economic woes. Along with marginal welfare, we’ll be emphasizing trickle up economics. It’s Jeb’s own personal theory. A falling tide leaves all boats, big and small, high and dry. High, get it? Everybody wins.” He said.

It was a rare moment when I was speechless but I had nothing to say. I walked home through Brooklyn and passed the Kosciusko Bridge. There were a few stranded boats there, the river almost dry, and low tide. They were high, dry, and uninhabitable. Maybe they could use some trickle up economics.
***
By MARQUEL: Marginal Welfare and Trickle up Economics