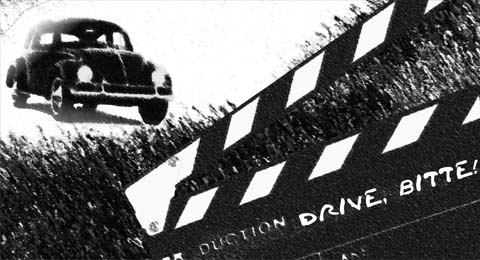 Mein Gott, wat a film!  Ja, zat Drive feature (DRIVE, 2011, directed by Nicolas Winding Refn) is really kohl.  Danke Hollywood for zis kinda remake of that Ryan O’Neal THE DRIVER movie, now mit ein new Ryan (Gosling) in zat bloody danish vision of direktor Refn.  Ja, Refn is really his name, not a made up name like a rapper name.  But just as a rapper, he never finished school.  So, he made it in America.  A Danish genuine.

Did you know that Refn is one of the two names in cinema zat has ein 25% vowels ratio?  The second one is Pitt.  You would expect maybe zat the former Austrian fuhrer of California to have a greater consonant ratio, but no.  Except for the short version, Schwarzy, which has less than 20% vowel ratio.  Nobody can beat zat!

Reverse gear to Drive for ein brief komment: German cars make better chase scenes, really.  I saw zat Drive has Impala, Mustang and Charger.  And I agree, Chevrolet Impala, Ford Mustang and Dodge Charger are nice looking American cars and I suppose zat zis is a gut enough reason to use them in car chase scenes.  Not really American though.  Not anymore.  American in spirit,  ja, maybe, but did you know zat only 30% of all cars zat appear in this film are made in America?

So, let me say zis: what good is to have ein car chase with Mexican cars in an American film made by a Danish director when you have perfectly good German cars laying around, driven occasionally by lawyers, dentists and Tom Hanks?

May I recall the good old days of the Bourne series when you could watch the tough confrontation between ein German schwartz Mercedes und ein Russian Volga on the streets of Moscow?  Sure, in the end, the Volga wins, but only because the Mercedes was driven by the bad guy.

Not the case anymore.

So, Hollywood, let the German cars chase and be chased again, bitte.

Or, by Gott, may America sink in an ocean of Hyundais!