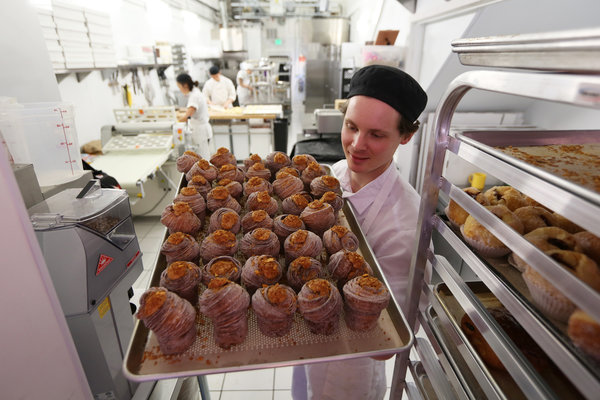 Marquel, TPVs NYTimes Good Fences Make Good Neighbors Section correspondent, was eating a piece of bread, when he read During Bakery Break-In, Only Recipes Are Taken.

After a recipe theft at Mr Holmes Bakehouse in San Francisco, lines there for cruffins, the West Coast’s answer to New York’s cronut, seemed to grow even longer. The mystery isn’t close to being solved and the list of suspects is long.

“I’ve seen a copy of the recipe, and it contains certain clues.” The captain in charge said.

“The recipe itself has clues?” I asked.

“Yes. I can’t reveal it but one ingredient has to be imported so we’re watching for new or large orders.”

“Then it could be solved quickly,” I suggested.

“Perhaps. But the same ingredient is often used in Quing Aman, a French bakery specialty. It isn’t made that often, but enough so that purchases might not be obvious.” He said.

“Fences for recipes?” I asked, surprised.

“Well sure,” said the cop, “You can’t hawk this in Times square, ‘cruffin recipes, cheap!’ You’d get caught in a microsecond. The alert is out.”

“No this is a specialty theft. It would be recognized by anybody who knows muffins. We think it’s a private collector. He’ll probably just file it in his cookbook just as a matter of pride. Maybe cook it once in awhile to impress his guests. Or if he’s particular nervy, he might display it next to his other stolen recipes.” He said.

“There are people who only buy stolen recipes?” I asked

“Sure that’s why they have recipe fences.” He answered.

“They did right away in San Francisco. Anybody fat with sugar stuck to his lips and mouth was stopped but it went nowhere.” He said.

“By that afternoon, every active duty cop and a handful of just fat people had been brought in for questioning. It turned out the investigators were also fat with sugar on their faces so they were apprehended too leaving us with nobody to lead the questioning. So everybody was released. To think we might have had him, though….” his voice trailed off.

“So you’re left with the fences.” I opined.

“Yes but we can pare them down. It had to be a Canadian or American because Europeans scorn this kind of recipe and Asians don’t understand it.”

“What do the fences say?” I asked.

“Very little. A few noises here and there and an interesting nibble in Alabama.”

“Somebody wants both the cruffin and cronut recipes to combine them. Only in the South.”

“It’s a tradition. That’s where they invented the turducken. We think they’re likely to try the same thing here.” He said.

“You mean put a donut in a croissant inside a muffin inside a chicken inside a duck inside a turkey?” I asked.

“Mhm,” he said, salivating. “No, we think just the croissant, muffin and donut.”

“How will you catch them?”

“Actually we’re watching the trademark office for anybody trying to register a croifinnut, or muffutant, or domuffaint or even a cromuffut.” He said.

“Easiest to say. Cromuffut, see? Rolls of the tongue.”

“Mmm. And into the mouth.” His eyes turned up into their sockets and he seemed comatose.

“Sorry I was just thinking. And dreaming….” He murmured.

This seemed like a case ready to be solved. And eaten.
***
By MARQUEL: Not a Klimt, Still Gold