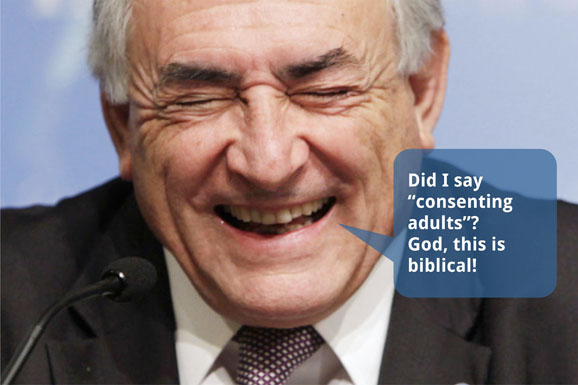 Dominique Strauss Kahn, the would-have-been French Bill Clinton, was unluckily undone by his carnal lust before the French people had a chance to vote for him. In a new twist of affairs, it transpires that DSK is finally repenting for having been “too out of step with French society. ” In a recent interview he added, “I was wrong.”

“I long thought that I could lead my life as I wanted,” he said in an interview with the French magazine Le Point. “And that includes free behavior between consenting adults.

DSK is a genuine clueless person and that is why his apology is as unnecessary as Goldman Sachs, CEO -Lloyd Blankfein’s demise and contrition are necessary. It is not the carnal lust that is being criminalized, Me DSK. It is the economic prostitution at heart of it all that is or should become illegal. Whether it is the $13000 DSK’s blow jobs cost or the billions of dollars that financially lustful CEOs cost us, there is no or little difference morally.

However, if TPV had a choice of spending taxpayers’ money, we would like to see – metaphorically – crushed Blanfein’s balls who, inter alia, played a major role in Greece’s and perhaps Europe’s bankruptcy, rather than DFK’s tepid cock.