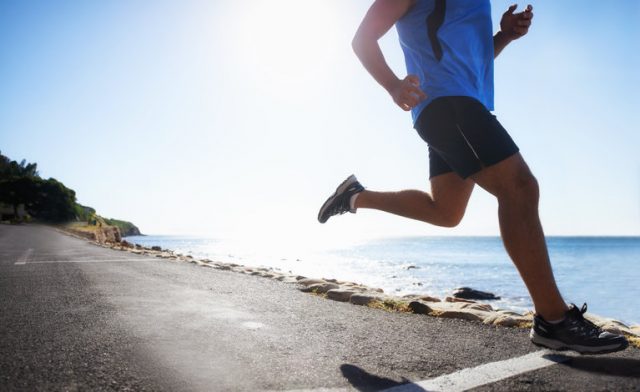 Think you’re too busy to work out? We have the workout for you. In minutes, high-intensity interval training (H.I.I.T.) will have you sweating, breathing hard and maximizing the health benefits of exercise without the time commitment. Best of all, it’s scientifically proven to work.

NY Times’ news that An Hour of Running May Add 7 Hours to Your Life.

“Of course. The secret is baby steps.”

Said the buff guy, as he put his thumb and index finger completely around Marquel’s bicep.

Then he told Marquel to go about his day and he would insert the really really short exercises.
Marquel poured some Cheerios, added milk and picked up his spoon.

Wow. Marquell was winded. Three, four, five. He waited a few moments to regain his breath and then started eating again.
The trainer smiled broadly. Marquel smiled back.

Two three four. He couldn’t quite make five . Marquel looked up at the trainer .

Marquel thought he should get to work . He lifted up his smartphone and dialed the Times. By now he was watching the trainer every time he moved . Sure enough, the trainer spoke .

Marquel spoke to his editor and explained, ” No, I can’t take anymore assignments . I’m in the middle of a major health investigation. ” He started typing out his notes.

The trainer said, “You’re working out too hard . Try to dictate that.”

Marquel did as he was told but stopped in mid sentence. ” I’m beat,” he complained.
” Of course , ” Said Stretch Armstrong. “You’re doing too much too fast.”
“I’ve gotta pee,” pleaded Marquel.

The big man raised his arm.” Save that until the end of the day. You’re doing too much. “

Marquel knew he was right. He was winded .
Still I figured maybe an hour of running would be easier. I told him.

“That would be fine,” said my guy.

We changed into shorts.

“Wait,” said coach. “Remember. Baby steps. One leg at a time. Then rest. Then the other leg.”

I was winded again. Just from putting on my shorts. I forced myself out the door.

“Whenever you’re ready,” he said, running in place, happy as pie.

I took my first step.

“Stop,” said coach. “If you want to jog, that’s great, but take a rest after each step.”

So that’s what we did. One step. Rest. Another step. Rest. Ad’s so on. I was winded when I reached the corner.

Coach was happy. He said, “That’s the secret. No matter what you do. Take a step, then rest.”

I do think that’s the key. To everything in life. Whatever you do. Take a step. Then rest. I’m exhausted from writing. Time to rest.
***
By Marquel: Short Workouts Amount to Little More than That