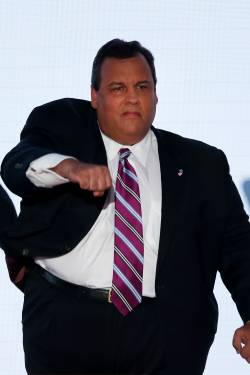 In the year 2016, to run for the job of US President it takes one of the following two mandatory qualifications:

either a spouse (define spouse) whose resume mentions “US President,” or a good looking (relatively speaking) real man from a real American state (read New Jersey).

While Hillary is playing coy with James Carvill, The Man from New Jersey, Chris Christie is playing Houdini with his tummy.

New Jersey Gov. Chris Christie secretly underwent lap-band stomach surgery to aggressively slim down for the sake of this nation, he revealed to The Post last night (but not in this many words) http://www.nypost.com/p/news/national/chris_cuts_waist_oAUDrJ8Sm1fY6awWgFY6nN?utm_source=SFnewyorkpost&utm_medium=SFnewyorkpost.

TPV believes that if he can stay slim or as slim as Hillary is cute, he can win.  So, can you do it, Mr. Governor?