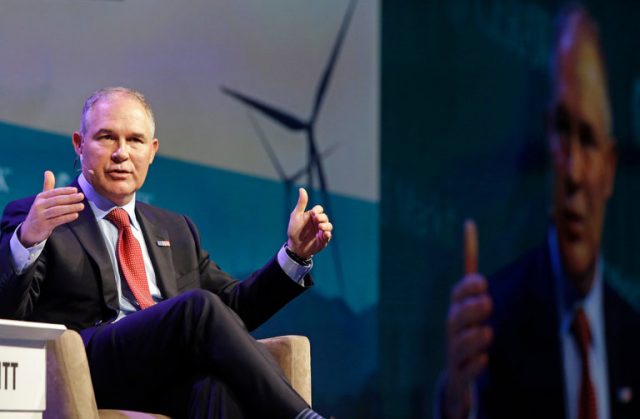 E.P.A. Chief Doubts Consensus View of Climate Change, Marquel read in disbelief. To avoid fainting, Marquel sprayed some more air freshener in his apartment . It stank to high heaven. Talk about climate change. The whole fucking atmosphere is changing. Meanwhile, Marquel had a call into this Pruitt guy . The phone rang. It was Pruitt . What are you supposed to say?

“Hello general,” said Marquel. He knew that wasn’t right. “Dr. Pruitt.” That wasn’t right either. “Mr. Secretary, how nice of you to call ! ” He got it right at last. Lots of pleasantries. Now to get down to business.

“I read in the Times today that climate change is not due to us humans. Phew ! I knew I hadn’t done anything to warm up the air. Had you?”

“Well some have accused me just because I was CEO of some oil companies, that I did it all by myself. Can you believe that?” he asked.

“Not at all , Mr. secretary. But things are getting warmer , and I might say stinkier . Can you explain that ? You are, after all , the head of the environmental protection agency. Can you protect us? “

” I’m sure going to try. We’re going to do lots and lots of more research and figure this out .” He said.

“But aren’t you worried that during all that research time, things will get worse? ” Marquel asked.

“Well we have some things pretty well figured out already . So, no, I don’t think more research will hurt. ” he said.

“If you have things already figured out , what are we going to do about it?” Marquel asked.

” That’s the problem. A remedy is difficult to craft.” He said.

” Let’s face it. The atmosphere is nothing but gas. The problem is gas. There’s way too much of it. ” he stated.

” Well is this caused by humans? ” Marquel inquired.

” I’ll say it is . For instance, I was with the president in the oval office and he let loose. I could feel the temperature go up 10° . Everybody else in the room could also. Everybody looked hot under the collar and were wiping their foreheads. ” He claimed.

” Yes. Farting. Human farting has caused global temperatures to rise 2° in the last century. ” He claimed.
” Do you have scientific proof ? ” I wondered.

” Most certainly. We will be issuing a report in the next few weeks . ” he promised me. ” We discovered this in an article in Breitbart. It also makes sense, doesn’t it? More people , more farting . More farting, more climate change. “

“So what are you going to do about it? “

” I talked to the president about it and we have come up with a solution. ” He assured me.

” A fart tax ” He responded .
” A fart tax? ” I was astonished. “How would that work? “
“Everybody pays a fart tax. The more they fart, the more they pay. It’s adjusted according to income as well, of course. The very richest would be exempt because they contribute so much to society they have a right to fart. Everybody else pays per fart. I think everything will start cooling down after that. ” Pruitt said.

” And smelling much better, ” I said as I hung up and sprayed a little more freshener into the room.
***
BY MARQUEL: Trump’s E.P.A. Chief Combats Gas & Climate Change