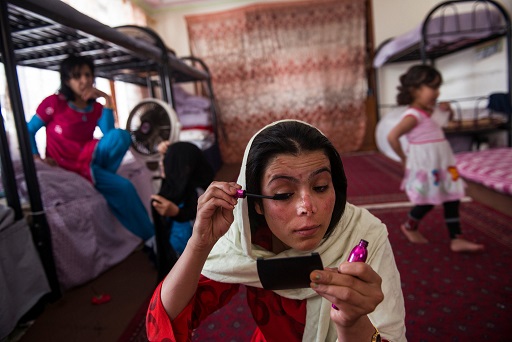 Marquel, TPVs NYTimes Death before Dishonor Section correspondent, was eating chicken soup because his mom used to call it the “penicillin of the poor,” when he belched and read A Thin Line of Defense Against ‘Honor Killings’ .

In an incredible instance of cultural imperialism, western entities have financed so-called women’s safe houses where Afghan women are lured from their homes, and from their intendeds, so that western countries can claim to have “saved” them.

They are hardly saved of course. They are hardly even there. Only a small shell of these former women makes it to the safe house. They are safe to live there without honour, without respect, without self-esteem, and without the hands and other anatomical members of her closest male relation, and of all his drinking buddies, filling her bodily orifices with whatever is handy, including deliciously mutated sperm cells. The empty women are consigned to an empty life just because westerners have no understanding of life’s pleasures and no notion at all of what familial honour connotes.

These women have lost every shred of honour. They have been encouraged to leave their homes and the wedding that awaits them. Their beloved, chosen by her parents with the utmost care and attention to whom is the highest bidder, is left standing at the altar, and of course later at the local bar, for the village circle jerk, with a villager dressed as Mohammed the star performer.

It’s is a disgrace and humiliation. Often the groom is the father’s brother, or perhaps his aging uncle or, in rare but fortunate cases, a recent releasee from the local pedophilia incarceration unit, halfway to rehabilitation but cut down in the middle of the process by the selfish young woman. At other times it could be the bride’s own brother, father, or the family dog, all of whom offer her unending delight, which western intervention deems unsuitable for her.

Westerners don’t understand the harm they do. The family has no choice but to kill the runaway and perhaps the young unprincipled and disrespectful man who may well have deflowered her already making her ineligible for marriage, as certain as a creme fraiche container that says expired last week.

These expired women have no honour left. Their families sit in the same boat except if they can get off a good shot at her head, or a plunging sword into her breast, it might rescue the family and sometimes remaining siblings from empty lives without honour.

Even the killings, so obviously necessary, are contested by western troublemakers. Do they understand this isn’t Kansas? An entire family, perhaps a dozen people, have had their self respect, esteem, and honour rudely ripped away from them. They stand naked to the world, without a shred of respect. Honour can be regained with the death of the malefactrice, the woman who prefers foreign penetration to that of a close relative, villager, or local pervert.

Westerners have succeeded in making Arab lives into an obscenity, condemned by the West, but historically the product of centuries of tradition. Just as the fiddler on the roof taught us modesty when judging tradition which reflects centuries of considered judgment, we should have been taught the wisdom of

Where did we go wrong? Isn’t tradition tradition? Are only some traditions–our own–worthy of respect while those we don’t understand get sent to the garbage heap.

I don’t really know the answer to all this but I do know we have a lot of thinking to do, starting with respect for honour killings, the lynchpin of the Muslim family.

Family values have disappeared in the West. Let’s protect what is left of them in the East!