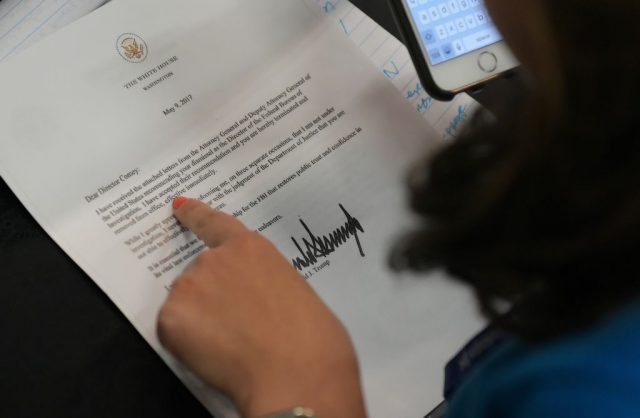 The right-wing Vortex lines up behind the Supreme Leader as he cheerily proclaims that he’s not under investigation: THE LOYALISTS 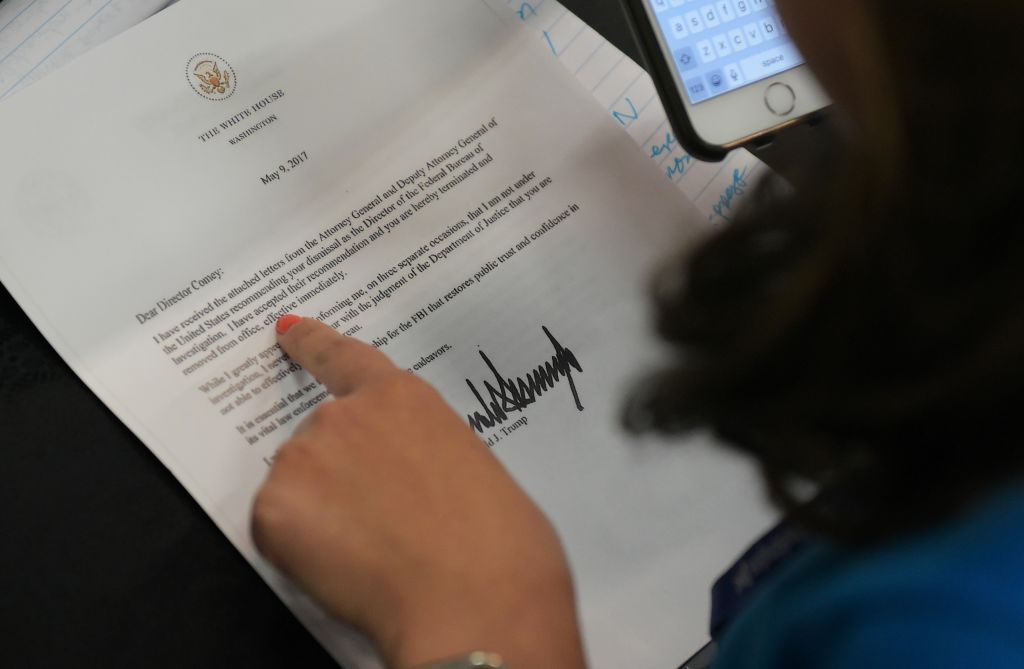 Gone, gone, gone are the days when the fashionable way to “cover” the White House was to speculate about who was winning the struggle for the flyspeck attention of the occupant of the throne, and to figure out whether Breitbart “News” was lining up too forcefully with Steve Bannon against Reince Priebus, or vice versa. Now the top priority is to circle the wagons to defend the Supreme Leader against the “the enemy of the people.” Duty calls. Trumpets blaring, drums beating, cymbals crashing, the White House amplification apparatus rushes whole hog to defend the battled Boss, even as in his dashed-off firing letter he can’t resist bragging that he is “not under investigation” when no one claims the opposite.

A quick tour of the right-wing media this week will show they’re wearing the blinders that it is their business to wear.

Fox News’ headline sounds the central theme: “Trump defends Comey firing, says ousted FBI director ‘wasn’t doing a good job.’” Well, that’s that! Why Trump is at pains to deny that he was under investigation by Comey’s FBI, when no one said he was under their scrutiny, is a question they leave unasked and unanswered.

As for The Daily Caller, it is equally incurious. To explain Trump’s timing, it settles for a quote from the Wall Street Journal:

“He refused to ‘say those three little words: “There’s no ties,”‘ the source told WSJ about Trump’s decision to fire Comey without any forewarning.”

In other words, Comey’s offense was to continue investigating Trump’s Russia connections. Indeed, Comey was far from finished, for as the New York Times reports:

Days before he was fired as FBI director, James B. Comey asked the Justice Department for more prosecutors and other personnel to accelerate the bureau’s investigation into Russia’s interference in the presidential election.

The Caller contents itself to quote a flat-out Justice Department denial in no uncertain terms: “The story is totally false.”

The Caller is unfazed by doubt even as, by divine coincidence, CNN reports as a sidebar to the Tuesday Night Massacre that a federal grand jury has issued subpoenas to associates of previously fired national security adviser Michael Flynn, in their pursuit of Flynn’s business records, which may or may not have to do with Russian arrangements. Neither The Caller nor Breitbart sees fit to mention the grand jury subpoenas.

The Caller does quote the unforgettable, astonishing 16 words that flare up in the second paragraph in Trump’s firing letter to Comey:

“I greatly appreciate you informing me, on three separate occasions, that I am not under investigation.”

— DONALD TRUMP, IN HIS LETTER TO THEN-FBI DIRECTOR JAMES COMEY

This smidgen of recognition that the Dear Leader is protesting too much passes quickly. The Caller expresses no interest in those three occasions hitherto unmentioned. It displays no curiosity about why Trump would go to the trouble to clear his throat once more, unbidden, to clear his name against accusations that no one has made. One might, if one were not The Daily Caller, think Trump is obsessed.

You don’t have to be the Queen of Denmark to think Trump protests too much.

As for the Gateway Pundit, it hitchhikes on a Fox News “national security expert,” Catherine Herridge: “FOX Expert Herridge: Comey Was Fired Because He Refused to Reveal Obama Unmaskers” — i.e., the tools of Obama’s “administrative state” who “ spied on and unmasked the identities and conversations of several Americans in 2016 including officials close to President-elect Donald Trump.” Herridge, sometimes known as Fox’s “chief intelligence expert,” doesn’t quite have her story straight, for she claimed in December that Russian doings were worth investigation:

“Fox News has independently confirmed that Russian backed cybermilitias were targeting US systems and influential US persons in the summer of 2015,” an operation which “evolved into an effort to interfere in the US election … sanctioned by the highest levels of the Russian government.”

But never mind. Gateway’s Jim Hoft is not interested in that earlier revelation from the “FOX Expert.” His sole interest is to sprinkle holy water on Trump’s letter.

Hoft also links to a “BOMBSHELL” of his own, quoting Rand Paul telling Fox News on Wednesday:

“I have two different reporters calling me saying they have sources saying the Obama administration was either unmasking [disclosing the identities of] or querying presidential candidates’.” Nothing there about “officials close to President-elect Donald Trump.” Hoft’s “BOMBSHELL” is a dud.

You have to hope that these minions of the right are paid overtime, for it’s hard work twisting yourself into knots to pretend that the regime’s explanations make sense. Even Charles Krauthammer on Fox News finds Trump’s explanation “implausible” and “inexplicable.” Krauthammer, who has not left his wits at the door to the Oval Office, breaks ranks to call attention to that “very strange clause…in the letter from Trump to Comey.”

That “very strange clause” consists of those 16 tantalizing words: “I greatly appreciate you informing me on three separate occasions that I am not under investigation.”

Who has been talking about FBI investigations on Trump? [Krauthammer asks.] This sort of explodes on us without any preparation, without any background. I suspect where this is going to go — is to that clause.

They do not — not yet — amount to a smoking gun. But you know what Chekhov said about a different revolver.

If it’s hanging on the wall in the first act, by the second or third it has to go off.