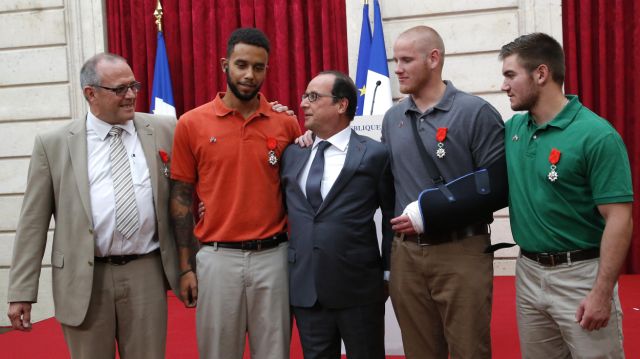 The president of France pinned his country’s highest award, the Legion d’Honneur, on three Americans and a Briton on Monday, saying they

“gave a lesson in courage”

by subduing a heavily armed attacker on a high-speed train carrying 500 passengers to Paris.

Inevitably, however, the would be assailant had a different story. Emaciated and tired from spending the last six months travelling from one country to another, he claims he found the submachine gun and nine magazines in a park. He didn’t intend to shoot anybody, just to ask if anyone knew who the arms belonged to. When asked why he was doing that barechested, he said,

“So that people would look at the guns to search their memories. They belong to somebody.”

When he was asked whether they might belong to ISIS, he said his

Meanwhile the heroes were feted at the Élysée Palace by president Hollande. He praised the Americans.

“Frankly you guys are nuts. We learned in World War I, World War II, and in Viet Nam that the best thing to do is run away. Then the Americans can come in and save us. You could have done that. Run away, and the Americans would have landed at Calais to save you.”

“But we are the Americans,” said one hero just back from Afghanistan.

“So we had no choice. We knew the frogs would run away, as you have just said, and as Americans it was our job to save you. I think it goes back to Lafayette or someone.”

“Yeah,” said another of the group,

“as soon as the guy entered our car my buddy said, ‘here we go again,’ obviously referring to the many times we’ve had to pull the French chestnuts out of the fire.”

Later they were all awarded the Légion d’honneur, one of France’s highest awards, and were praised by président Hollande for,

“amazingly  not running away. To a Frenchman this is unimaginable. Even in the army we train to run away. You can run forward or even backward facing the enemy, but the goal is the same. We even learn sneaky ways to surrender that allows us a chance to run away. But it’s not the point. Anyway, time for the medals.”

Hollande went down the line of the Americans and one Englishman, pinning the medals to the men’s chests. The soldier took his off immediately, saying,

and it turns out he was right. Armed forces regulations forbid the wearing of foreign awards except under special conditions and apparently being in France isn’t one of them.
There was a mild disruption when Hollande tried to kiss the Americans. They all resisted his hug and stared him down as if he were ISIS itself. When Hollande tried the opposite cheek, heads collided. The Americans didn’t know which way to go and there were apparently two kisses for each hero. One soldier immediately shouted, somewhat cryptically,

“sexual harassment, we’re trained in that. We’ll have none of that here,”while the other serviceman screamed, “rape,” until his buddy explained the difference.

All the Americans asked for Purell

“to wash the frog germs off my face,”

which was immediately served in small Louis XIV ornate ceramic finger bowls. The Americans wiped up and Holland consumed a bowl of the lotion by himself. He left the ceremony soon after, with some comment about American cuisine and when the reporters came to interview him, he