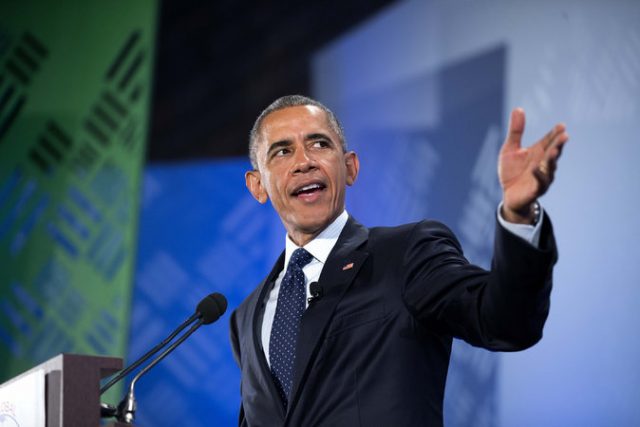 Marquel, TPVs NYTimes That’s Where I Hail From Section correspondent, was sleeping and snoring, when a fly woke him up, and he read “In Kenya, Obama Hails Africa’s Growth and Potential.” Marquel couldn’t cover this story without flying to Kenya, so he used up all his miles he got from purchasing coffee at Starbucks to get there. The Obama delegation was firmly tied down and almost nobody was allowed to say a word.

Marquel approached the man in red and tried to interview him, but the language barrier was too much. The man in red looked around suspiciously, dusted off his clothes, and disappeared.
The following day, Obama gave a speech praising the progress Kenya has made “since last I was here,” which was apparently ten or twelve years ago. He subtly attacked the previous administration when he said, “imagine how much more progress would have been made if Kenya had the full support of our country for a longer time than just my time in office.” There was prolonged applause. Apparently the Kenyans are all Democrats.
That night, in the hotel bar, I met with several Obama deputies. They all professed ignorance of the man in red, and had no explanation for the events.
At the airport next day, as I left, Obama appeared again, meeting some State Department officials. The man in red appeared suddenly, was grabbed by security, bundled into a van, and taken away. I went to get my flight but saw the envelope in the road, the same one, it seemed, that the man in red had tried to give Obama for the last two days.
It contained Obama‘s name, that of his family, and his birthday. It was a birth certificate showing Obama had been born in Kenya in the Nairobi central hospital on August 4, 1961. Wow. I was holding something historic. But if it got out, it would invalidate an entire presidency, I knew. So, poison or not, I crumpled the paper, chewed it 39 times, for safety, and swallowed. I could have been famous, but I took one in the stomach for Barak instead. And then I wrote about it.
***
by MARQUEL: Here We Go Again