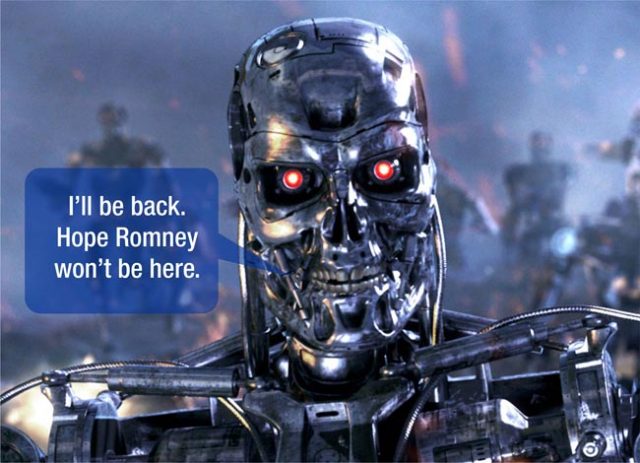 “I’ll be back” Arnold Schwarzenegger said as an American actor many times, most notably in his role as the title character in the 1984 film, The Terminator. The Beatles had an “I’ll be back” hit, as did one of my favorite groups, UB40.

Now, the Republican presidential duo, Romney/Ryan, introduces itself as the “comeback team,” and all I can visualize is Arnold with a mutilated face.

But, can anyone bring America forward? Shan’t we get ready for the competition ahead of us? Shan’t we think about how we can raise corporate taxes to support public education and health care (not health insurance, Mr. Obama) so in the competition ahead with China and India, for example, we do not let these developing countries win hands down?Of course, if you click on the Romney/Ryan the visual is dollar signs: you are being asked to donate to the RR team so they can create some jobs (really? really).

Don’t we all deserve a “Let’s get ahead America” team?