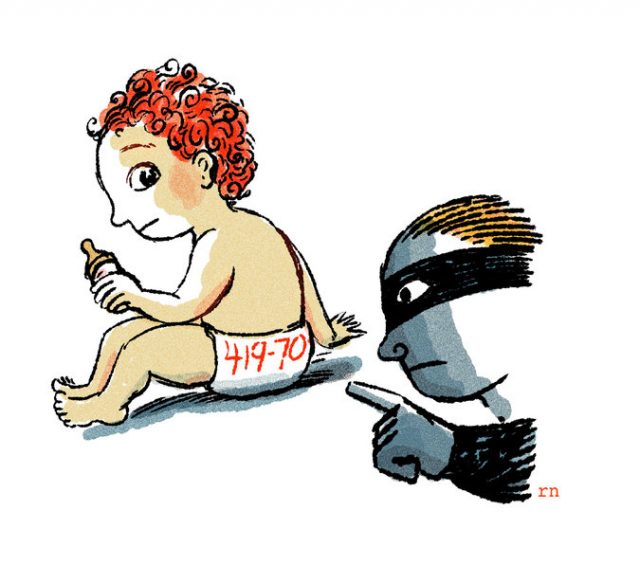 Identity Theft Poses Extra Troubles for Children, Marquel read in the Times and yawned. That was news, he thought and continued his walk through the city. He passed an old fashioned lying-in hospital in Manhattan and saw something like an auction going on. Thirty seven children were going to the highest bidders. The children had no names, no identities.

The problem of identity theft has reached its most tragic nadir. Parents were picking between the babies but couldn’t decide which were their’s. Nobody wants to leave their own, but nobody wanted a stranger either.

It’s a problem across the country. In an apparent plummeting of the birth date, the U.S. population seems to be dropping ten per cent per year which is quite impossible. It seems to have started when various financial and other advisors advised parents, mostly upper class with high incomes, to get social security cards for their children at birth. Apparently there is some financial advantage to it.

But mostly it was a tease to identity thieves. These social security accounts were virginal just like their rightful owners. Unblemished. With an account like that, a person with multi-million dollar debts could start over.

And indeed they did. Thousands and thousands of these accounts have been stolen and resold for up to five figures and sometimes more.

But if you stand outside Spence School, for instance, one if those rarified super rich academies with more money than sense, you will see a surplus classroom outside. Forty or so students are there because they can’t prove who they are. Their identities have been stolen. Even they sometimes don’t seem to know who they themselves are.

“I don’t  really know,” said one uniformed student, moping around with nothing obvious to do. “I know who I am but my account says I’m Pedro Almodovar, some Colombian Mafioso, and he’s now me! This is impossible.”

I spoke to the feds about this. They told me they didn’t know where it would end.  “For an adult, reconstructing your identity is arduous but doable. You have a record of jobs, education, income, networks. But a five year old, or even younger, hasn’t a chance. I call it the second Lost Generation. Hillary’s. It’s like Hemingway all over again.  These kids will be wandering around.

They have terrible credit records. At three! They can never climb out of that hole and their parents want nothing to do with them.”

“What do you mean their parents don’t want them?” I asked.

“These are upper east and west side families. Their credit reports are their lives. If they let these kids back in their houses, their own credit scores will crash. They’ve spent their whole lives at this and now it’s all imperiled.” He said.

I returned to the hospital. Parents were tearful but had given up. “I can’t take a stranger into my house. It would violate my lease,” one said.

“So you’re going to leave your own flesh and blood here just because Equifax was reckless with its security?” I asked.

“A kid with that credit report can’t be my flesh and blood. My whole family has top scores. It’s almost genetic. I can’t bring home a two day old child who’s already filed for bankruptcy before he was even born. I have to leave him. Poor little Colombian bum.”

It did look like the Colombians were heavily involved but I was sure they couldn’t imagine the damage they’d done. This was an American problem. Or let’s say an upper east and west side problem.

I went home by bus. I tried a taxi but my credit card wouldn’t work. I was starting to worry who I was but Mufi came by to visit and recognized me right away. What a relief.

By MARQUEL: The Immeasurable Value of Children