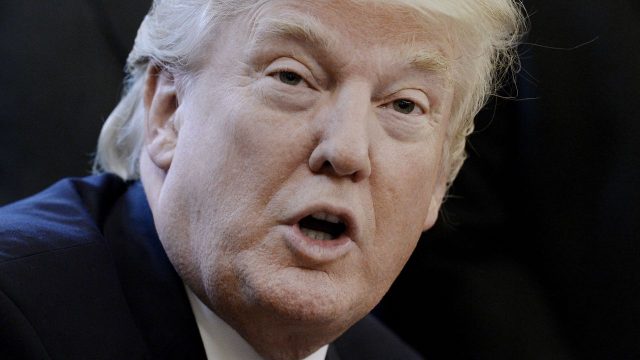 Once upon a time, there were presidents for whom English seemed their native language. Barack Obama most recently. He deliberated. At a press conference or in an interview — just about whenever he wasn’t speaking from a text — his pauses were as common as other people’s “uh’s.” He was not pausing because his vocabulary was impoverished. He was pausing to put words into sequence. He was putting phrases together with care, word by word, trying out words before uttering them, checking to feel out what they would sound like once uttered. It was important to him to words in order because he did not want to be misunderstood. That president valued precision, in no small part because he knew he lived in a world where every last presidential word was a speech act, a declaration with consequence, so that the very statement that the sky was blue, say, would be scoured for evidence that the president was declaring a policy on the nature of nature.

That was then. Now we have a president who, when he speaks, spatters the air with unfinished chunks, many of which do not qualify as sentences, and which do not follow from previous chunks.

That was then. Now we have a president who, when he speaks, spatters the air with unfinished chunks, many of which do not qualify as sentences, and which do not follow from previous chunks. He does not release words into a stream of consciousness but into a heap. He heaps words on top of words, to overwhelm meaning with vague gestures. He does not think, he lurches.

Here are some examples from TIME’s transcript of their cover story made out of their phone interview with the president of the United States. I have italicized the non sequiturs, incomplete propositions, indefinite pronouns and other obscurities that amount to verbal mud.

Scherer: So you don’t feel like Comey’s testimony in any way takes away from the credibility of the tweets you put out, even with the quotes?

Trump: No, I have, look. I have articles saying it happened. But you have to take a look at what they, they just went out at a news conference.

Scherer: Mitch McConnell has said he’d rather you stop tweeting, that he sees it as a distraction.

Trump: Now the problem, the thing is, I’m not sure they are watching anything other than that, let’s see members of Donald Trump transition team, possibly, oh this just came out.

Trump: I took a lot of heat when I said Brexit was going to pass. Don’t forget, Obama said that UK will go to the back of the line, and I talked about Sweden, and may have been somewhat different, but the following day, two days later, they had a massive riot in Sweden, exactly what I was talking about, I was right about that.

Trump: And then TIME magazine, which treats me horribly, but obviously I sell, I assume this is going to be a cover too, have I set the record? I guess, right? Covers, nobody’s had more covers.

Scherer: And apparently there is an investigation into that as well.

Trump: Well should be, because that’s where the whole, who would think that you are speaking to the head of Mexico, the head of Australia, or Gen. Flynn, who was, they are not supposed to release that. That is the most confidential stuff. Classified. That’s classified. You go to prison when you release stuff like that. And who would release that? The real story is, they have to work, intelligence has to work on finding out who are the leakers. Because you know what? When things get involved with North Korea and all the problems we have there, in the Middle East, I mean, that information cannot be leaked out, and it will be by this, this same, and these people were here in the Obama years, because he had plenty of leakers also.

Trump: I inherited a mess in the Middle East, and a mess with North Korea, I inherited a mess with jobs, despite the statistics, you know, my statistics are even better, but they are not the real statistics because you have millions of people that can’t get a job, OK. And I inherited a mess on trade. I mean we have many, you can go up and down the ladder. But that’s the story. Hey look, in the meantime, I guess, I can’t be doing so badly, because I’m president, and you’re not. You know. Say hello to everybody, OK?

Now, TIME’s cover headline for this mishmash is pointed as well as clever: “Is Truth Dead?” — clever, at any rate, in the eyes of readers old enough to remember the 1966 prototype: “Is God Dead?” A still more pointed treatment is that of Ellie Shechet at the feminist website Jezebel — a redaction, or what be called reporting by subtraction. In the words of headline, “We Redacted Everything That’s Not a Verifiably True Statement From Trump’s Time Interview About Truth.” Unsurprisingly, Jezebel ended up having to edit the transcript so that the passages blacked out were lengthier than the words left in.

What explains this? Is Donald Trump the heir of generations of avant-garde poetry?

But the problem is not just that Trump lies, or that he lies about having lied. The problem is not just that he distracts — for example, changing the subject from his entanglements with Russians to the leakers who leak stories about his entanglements with Russians. The problem is that he insinuates more than he argues. He disdains not only evidence but logic. He asserts by indirection. This is bubble-think. It makes a sort of sense only if you’re trapped in the bubble with him.

What explains this? Is Donald Trump the heir of generations of avant-garde poetry?

Probably not. What’s more likely is that he is deranged. It is a peculiar sort of derangement. It is the derangement of a man who is used to getting what he wants, and arranging his mental universe so as to convince himself that what he has gotten is what he wanted. His operating theory is that he makes things so because he is powerful. His power is such that he is not subject to laws of ordinary grammar.

These bursts of speech are like the announcements that shriek “TRUMP” from the walls of many of his hotels. They do not signify ownership. They signify…something. Whatever. They add up to a haze of indefinite implication. They constitute, in our contemporary discourse, a brand. They signify that Trump has something to do with this building. Something. If you’re privy to the code, you know that there’s a licensing arrangement. Trump has been paid to grant the use of his name. If you think it’s a good thing to be associated with his name, then he has some water, some steaks, some vodka — even a “university” — to offer you.

Trump has moved the sign system of modern capitalism toward a whole new capitalist art form — the free-floating name that describes nothing. Trump has peeled language away from meaning.

He has brought to fruition the title of the 1984 Talking Heads album: Stop Making Sense. His regime is a nonstop exercise of “Let’s Pretend.”

His con game requires the bending of millions of knees. Americans are invited to willingly suspend disbelief, play dumb and collude in his cynicism. We agree not to notice the nonstop gibberish that spreads from the Oval Office outward. We agree to brag about our democracy when the president of the United States is responsible neither to logic, nor to evidence, nor to the American people, nor to the English language. We are expected to live in an alternative universe which is not only post-truth but altogether post-language and post-meaning. Any journalist, any talking head, any pundit, any commentator, any politician who pretends that Donald Trump makes sense has volunteered to go to work in the tailor shop where his invisible clothes are weaved.