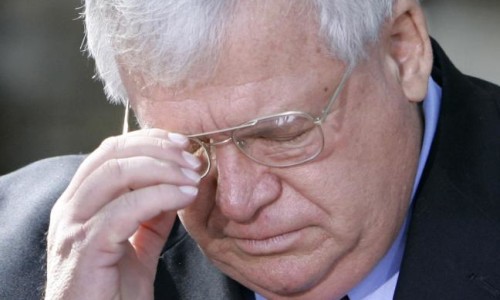 Hastert Case Is Said to Be Linked to Decades-Old Sexual Abuse, read Marquel, TPVs NYTimes Advanced Coaching Techniques Section correspondent while buying flowers for his friends in France, whose wives were also mothers. It’s the same old story. The coach of the wrestling team gets a little to close and tries a few moves and pins himself.

The problem here is that Coach Hastert eventually moved on to Congress and, ultimately, became majority Leader. He lived in an apartment with his Chief of Staff, and they say that was an historical first. His wife, they say, lived in a hotel. Everything else he did had been done before. Way too often.

You might wonder, and so did Marquel, why we’re being so hard on someone just for being gay. Underneath it all, Marquel suspects that’s what’s going on here. But Coach did cross a few real lines. He paid a lover to be quiet about it all. About a million dollars in fact. And then he lied to the FBI about why he withdrew all that money. Lying to the FBI is a crime which is unusual because for most lies to be criminal, they have to be under oath. And then you have a better record of what was really said. But we’re getting off topic.

What really pissed off the FBI was that they wanted to get the lover for extortion. But Coach, being Coach, would have none of that. When he refused, and allegedly said that the cash was more convenient than checks, they arrested him for being a big fat liar. Well what’s Congress for except lying, wondered Marquel.

So he called the FBI. “What’s with this lying charge?” He asked.

“But people lie all the time. Do you intend to arrest the entire government?” asked Marquel.

“Well that’s convenient, especially if you suspect your wife was unfaithful. Do you have to warn her that it’s a crime to lie to you?” I asked.

“No warning necessary. It’s a crime to lie to the FBI.”

“I guess that’s the way it should be,” I granted, “after all this is America.”

“But you asked him a question that would force him to admit he was gay, that’s quite obvious. Isn’t this a bit of a witch hunt?” I asked him.

“Hell we’re way beyond that possibility. All the gays getting married, holding protests, marching, appropriating the rainbow as if it’s theirs. I don’t think you can bait that much power.” He insisted.

“Well you know he still has a right to keep his sexuality private, don’t you think? He even voted against gay rights consistently during his years in Congress.” I said.

“Well there’s one fucked up faggot.” He said.

“Being fucked up is no more criminal than being a ‘faggot,’ is it? You know he had to hide it all his life, even went to Wheaton College when it was a sin and even today it’s against the college rules to commit homosexual acts.” I said.

“Sounds like that school has its head screwed on right,” he said.

“It’s a Pentecostal school so you can imagine. Where’d you go to college?” I asked him.

“Wheaton, where else?” He asked me.

“
Nowhere I can think of.” I said, and hung up, hoping he wouldn’t arrest me.