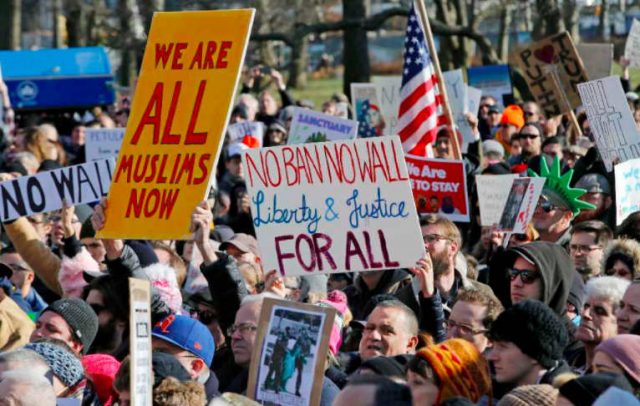 On January 27, 2017, our so-called president Trump (#so-called #president) signed an executive order temporarily banning immigrants and refugees from seven majority Muslim countries, where apparently he could not find anybody to buy a Trump franchise. The immediate result was utter chaos in airports all over the country with  60,000 properly issued visas subsequently revoked.

Lawsuits followed. One reached Federal Judge James Robart of Seattle and on Friday, February 3, the ban was temporarily halted as not rationally grounded on its fear of refugees bombing America.

Customs officials told airlines that they could resume boarding banned travelers. Qatar Airways, Air France, Etihad Airways, Lufthansa and others said they would do so.

The opinion of this so-called judge, which essentially takes law-enforcement away from our country, is ridiculous and will be overturned!

The Trump administration’s request to reinstate a travel ban was blocked by a federal judge on Friday. The late Saturday night ruling means the travel ban will remain suspended until the full case has been heard.

The  two states bringing the lawsuit argued that the travel ban, affecting people from seven mainly-Muslim countries, was unconstitutional.

In its appeal, the Justice Department said Judge James Robart had overreached by “second guessing” the president on a national security matter.

It also argued that only the president could decide who can enter or stay in the US.

These are grave times when courts are being bullied to abandon their role of checks and balances of the executive power on “second guessing” grounds. America has elected a man who is unfit to be president. Britain has known unfit, mad kings. Other countries have been forced to settle with clinically unbalanced people too. But none had the misfortune of an unfit president surrounded by equally unqualified advisers, such as a daughter, a son-in-law and a Bannon.

This is America. Are we waiting for a military coup to depose this so-called president, people? Can’t the people take care of this matter, if Congress has been bullied into silence?

By DANA NEACSU: Our So-Called President Has No Checks Nor Balance. Only Bannon