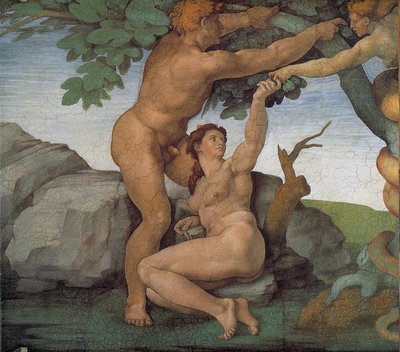 Marquel, TPVs Times Horseshit correspondent, called the editorial board in disbelief asking if TPV would ever consider publishing something along the lines of The New York Times’ Christian College Faces Uproar After Bolstering Its View on Evolution. Apparently, Bryan College now says Adam and Eve

“are historical persons created by God in a special formative act, and not from previously existing life-forms.”

Marquel marveled at these so called Christian colleges. They pretend to educate their students but then they insist they accept all sorts of horseshit as fact. For instance the latest one is Bryan College which insists that all students and faculty agree that Adam and Eve were real people created by Good out of nothingness. I wondered about that couple, about the snake and the apple, and the hot sex they must have had after eating the fruit of the forbidden tree. Or was it the forbidden fruit of the normal, apple, tree?

I strolled the campus. It was beautiful and bucolic and filled with evidence of evolution. I went in to see the dean. I asked him why all the staff and students had to sign a document saying that Adam and Eve were historical figures and were created by God out of nothing.

“We are a Christian college. Without this statement, what would we be?” He asked.

“A good college?” I responded.

“That’s not the issue,” he said, trying to be diplomatic.

“But it’s so counter factual, ” I said, “even counter biblical.” His eyed flashed.”I mean surely Eve was not created of nothing. She was created out of Adams rib.”

He was silent. Then, “but the rib was created out of nothing because it was Adam’s.”

“Nevertheless, the rib is a problem. If you don’t believe in evolution. Isn’t that evolution? From a rib to a body? That’s strong stuff.”

“Sounds like evolution to me.” I insisted. He made a gesture. “What was Adams last name?” I asked.

“So Eve couldn’t be Mrs anybody, right? I mean there’s no name for her to take. Unless they both took Adam. Then it would be Adam and Adam instead of Adam and Eve ” he looked at me with exquisite patience as if he’d been through it many times. “Who married them?”

“As far as we know they were unmarried.” He says. “But God blessed them.”

“Yeah but think of what those words were. Fuck like bunnies. Fill every orifice. Group sex if we ever get another human of either gender. It’s wild, like the sixties on Viagra!”

“I have the feeling you’re not a believer,” he said.

“Here, you might,” he said. “We’re a Christian college”

“That’s not very Christian,” he said.”

“That’s not very surprising,” I riposted.

“I think you would be happier if you believed.” he said.

“But for someone who values intelligence, why can you not believe in the Creator?” he asked.

“I thought I answered that. I don’t believe or not in God. I know he doesn’t exist.” The dean raised his eyebrows. “He told me.”

“Yes, when I was about to seven. He came into my bedroom and said, ‘don’t believe the horseshit. I don’t exist, do you understand?’ and I answered, ‘God does not exist,’ and he smiled and left. That’s pretty good evidence that God doesn’t exist, don’t you think?” I asked

He clearly couldn’t get his hands around this one. “God told you he didn’t exist?”

“Um hum,” I answered as articulately as possible.

“Well that means he does exist, doesn’t he?” he asked.

“I think it’s called acting in mysterious ways. Unless you’re prepared to deny the word of God,” I paused. He looked both startled and threatened. “If God says he doesn’t exist, you’d better believe it. In fact, at that point, you know it. And I do. Sorry.

“That’s interesting. He looked just like my next door neighbor, Frankie. Frankie had long red hair and was always hassling me and teasing me. When God came into my bedroom, he looked just like Frankie.” I answered. The Dean looked down at his hands.

“Tell me,” I said. “What about this talking snake? Since when could snakes talk?”

“Well, in biblical times anything was possible.” He said.

“Why just in biblical times?” I asked.

“Seen any talking snakes?” I asked.

“No, God punished the snake by taking away his legs and his voice.” he said.

“Uh uh,” I said, shaking my finger at him. “I think he took his legs, but it says nothing about his voice. Furthermore, even if the snake could talk, how could he think in such complex terms? Here, take this apple, you’ll have good sex. Where’s that come from?”

“I think you’re editorializing. He said nothing about sex.” He said.

“And you call yourself a Christian college?” I asked.

“Well, it seems you’re falling down in that area. Don’t you study these passages to see what they mean? Even though God doesn’t exist as a matter of fact, as a matter of literature, it’s clear what that passage means. Eve was corrupted. And its fun, fun, fun, till your daddy takes your T Bird away.”

“Thanks, but no thanks. I’ve got to be going. Good luck with getting people to sign that statement. Tell them they’ll have better sex. I’ll bet they’ll all sign.”

We shook hands and parted.