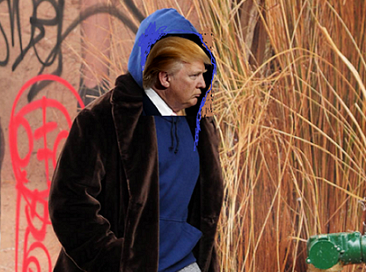 At least one percent of Iowans would vote for the real estate mogul Donald Trump in the upcoming Republican primary who has thrown his hat in the ring again, many speculate, for cheap publicity.

The Des Moines Register last week reported Trump would be a keynote speaker “at the Lincoln-Reagan Day Dinner on May 15 in Pottawattamie County.”

Trump, the Reality TV celebrity, famous for firing people from the “The Apprentice,” has never been able to fire-up enough support to mount a real campaign. However, his presence in the political arena provides something interesting to the otherwise tired, bored, and apathetic journalists. Talking about The 2012 election cycle, Trump told the Des Moines Register last week:

“I was leading in every poll. … I regret that I didn’t stay in. I would’ve won the race against Obama. He would’ve been easy. Hillary is tougher to beat than Obama, but Hillary is very beatable.”

There is consensus among political pundits that Trump’s campaign will again suffer erectile dysfunction.

“Even if Trump can get it up, he will finish very quickly,” predicts an analyst intimately familiar with the tycoon.

Trump, however, disagrees. He believes he can fix-up the country in a jiffy. He demonstrated his ability to elegantly locate and dismantle problems with an economy of words when he told the Iowa Freedom Summit hosted by Republican Rep. Steve King:

“Our country is in such trouble and it would be so easy to fix. We have such great potential. If I run for president, and if I win, I would totally succeed in creating jobs, defeating ISIS and stopping the Islamic terrorists—and you have to do that—reducing the budget deficits, so important, have to do it, securing our Southern border, and I mean seriously securing, stopping nuclear weapons in Iran and elsewhere, saving social security, medicare and medicaid without cutting it down to the bone, because it’s not fair to people that have been paying their whole lives and other people, and it’s not fair to future people coming up, and we can do it, repealing Obamacare and replacing it with something far better for the people and far less expensive, both for the people and for the country, and believe me there are plans that are so much better for everybody and everybody can be covered. I’m not saying leave 50 percent of the people out, everybody can be covered. This plan is just a basic disaster.”

Following the summit ThePotHoleView called several Call Centers located in Des Moines and spoke to telemarketers who were eager to speak to us. Sally, who was ecstatic that TPV was calling instead of some stupid customer, told us:

“I dislike listening to political speeches. All too often, these clowns who show up every four years, just hem and haw and drop references to their resume by mostly making stuff up. Most of the time, they just state the obvious. Pretend to be overly pious. Everyone without fail claims to be a moderate. They feign shock they don’t really feel. Even when I agree with them, I am bored within two minutes.”

When we asked if Trump’s unrealistic attempt for the Republican nomination borderlines pathology, Jenna, an Outbound Telemarketer who targets urban demographics said:

“He ain’t crazy, you is. You is wastin your dime to check up on him. You know what I am sayin?”

By IBRAHIM SAJID MALICK: Come on, man, I love Trump. But he ain’t have Iowan of the Year