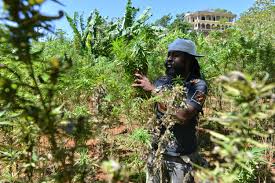 “Did they also legalize steel drums?” He asked.

“I better look into this,” Marquel determined.

Marquel had the number of the Marley family but he didn’t want to interview them.
“How can I interview a justice of the Jamaican Supreme court?” Marquel asked.

There was a long pause, the sound of exhaling, inhaling, an even longer pause, controlled exhaling, and finally, “I’ll have him call you, brother.”

“Thanks.” said Marquel, and sat staring at the phone.
Finally it rang. A Jamaican tinged voice asked for Marquel. It was the chief justice, the caller explained.
“Your honour,” I said.

“What can” he said, paused, exhaled, inhaled, exhaled slowly, “I do for you?”

“Well it’s about this ganja?” I asked.

“Yes ganja,” I repeated. “I heard it was just legalized.”

“In a sense.” He said. More breathing sounds.

“How could they legalize pot when it’s already the national pastime?” I asked.

“That’s already legal. It’s in our constitution. As well as 43 positions. Jamaican are very progressive.” He said.

“Does that include the missionary position?” I asked.

“Yes and no. Here it is called the imperialist position, and it’s only legal on national holidays. But there are 42 others you can use any time. Some of them are amazing.” He said.

“I can imagine. Or maybe I can’t. Any involve ganja?” I asked.

“Three of them do. One is called Hillary. Another is called Bill. And of course the basic one, called Monica.” He said.

“And that’s all in the constitution?” I asked.

“What comes after sex?” I asked.

“Does it say ganja or marihuana?”I asked.

“Oh no, nobody would know what that is. It says ganja.”

“Anything about steel drums?” I asked.

“Anything mention music?” I asked.

“Oh sure. The Marley Amendments. They include ska, reggae, and associated genres.” He explained. Then there was nothing but silence. Some snoring and coughing.

“Are you there, Mr Chief Justice?” I asked.

“I could use some good ganja.” I said.

“Are you a Jamaican citizen?” He asked.

“Afraid not.” I admitted.

“Well that’s complicated because it depends on income. But that’s why we had new legislation. It effectively amended the constitution, and became our First Amendment. The right to ganja. As a constitutional right, it’s as important as education which doesn’t appear until article three.” He said.

“So the law didn’t just legalize ganja, it made it a civil right?” I asked.

“Technically yes but civil rights are in the fourth article. The First Amendment guarantees access to ganja, not just legalized it.” He said.

“Wow, you are the ganja nation.” I said.

“We try to be. I’ll tell you what, I’ll send you a bit of my own stash as a present. Will you say nice things about my country?” He asked.

“That’s all I know about Jamaica. Nice things and nicer things.” I said. Somehow I sensed him nodding off. We could use a Chief Justice like that, I thought. I hung up very quietly so I wouldn’t wake him.
***
By MARQUEL: Ganja Nation
[embedyt]http://www.youtube.com/watch?v=q7iXcKKpdx0[/embedyt]