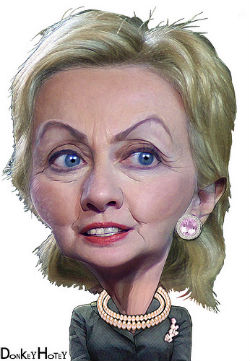 Hillary’s people have infiltrated the Progressives, which now act as Hillary’s minions.

In a desire to promote Hillary as a one-size fits all, the triangulating Progressives are spreading false rumors that Hillary is a progressive’s choice. To achieve that feat, the so-called Progressives ask you to acquiesce in their decision and shut up.

Here is their “SURVEY: Tell us what you think about the 2016 presidential race,” which spammed my inbox this morning. It purports to ask for my opinion, but there is no space for dissent. There is no space to submit another choice than Hillary:

As buzz about 2016 begins to build, let us know what you think about the presidential race!

In the coming months, progressives have big choices to make about how to impact the election.

In two sentences or less, why?

What issues do you want Hillary Clinton to be more progressive on?

If you have received the same survey, then we all live surrounded by the same delusional, bullying, deaf progressives.

Don’t feel defeated. You have us, TPV! TPV invites you to get up, stand up against bullying, and step over the woman/cry drama.