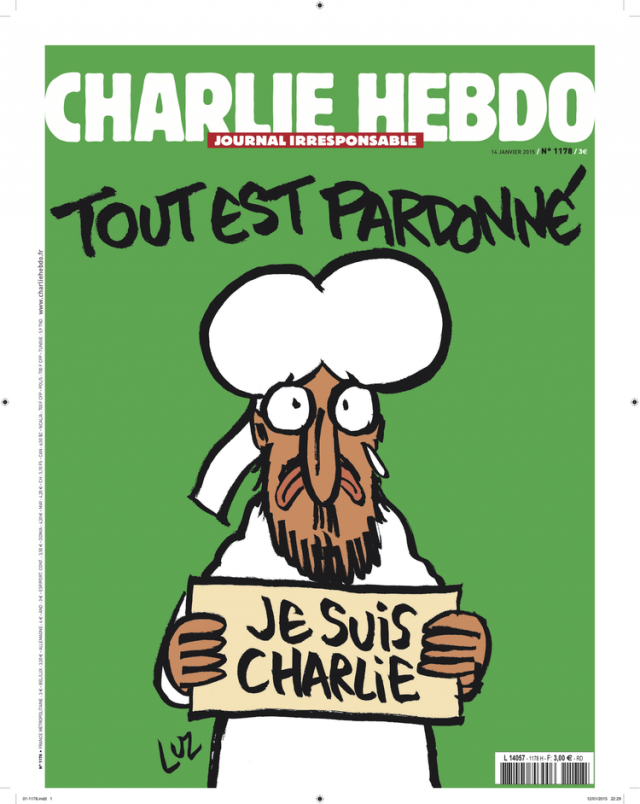 From The New York Times, By Marquel, TPVs NYTimes Let’s Not Make Waves Section correspondent, was swimming in the East River, when he took a break to read New Charlie Hebdo Cover Creates New Questions for U.S. News Media. The cartoon depiction of Muhammad on Charlie Hebdo’s new cover has presented another editorial judgment to news media about whether to republish it.

But not for the New York Times.

They decided before Charlie Hebdo ever was attacked that they would “never ever, ever, publish a likeness of the Prophet Mohammed.”

Marquel considered this. He’s not their prophet. Their prophet is mostly Moses. They publish him. They publish Jesus sans cesse. Even in urine and covered with elephant shit. Clearly the Times is simply scared. Charlie Hebdo occupied a semi ramshackle building in not the best part of town. The Times has a new building identified by the name of its architect–three of them, actually, Renzo Piano, his Build Workshop, and FXFOWLE Architects. Let’s face it.

On the other hand this cover does not exist to offend although Muslims who are offended by the prophet’s image may take offense. It has independent news value. It does have Mohammed but he’s crying. It forgives the terrorists. There is a suggestion of an inverted penis or scrotum but after all, this is Charlie Hebdo, the only social unit whose prophet IS the scrotum.

No, Marquel was not convinced the Times had made the right choice. He went to the triple architected Times building and spoke to the editors.

“We really couldn’t publish a gratuitously offensive image.” One editor told me.

“But what’s gratuitously offensive about it? Mohammed’s image is respectful, he’s not having sex with a canary, and he’s crying and forgiven. Considering that the magazine’s staff was murdered purportedly for offensive pictures isn’t it newsworthy, and worthy to see, the cover?” I asked.

“It was a judgment call.” He said, as if calling it that justified it.

“But that’s really bad, isn’t it, if you’re judgment was wrong? Doesn’t it matter more what motivated your judgement?” I asked.

“I think I trust the editors,” he said.

“Yes and the extremists trust their imams. Isn’t this a case where everyone including the staff has to make their own judgement call? It’s newsworthy and not meant to offend. Therefore it should be published.” I argued.

“What about the penis?” He asked.

“Turn it around and you’ll see a scrotum and penis,” he said.

“Is this like playing the Beatles backwards and finding Paul is dead? In fact he’s alive!” I exclaimed.

“This isn’t about the Beatles.” He protested.

“It’s the same. Turning pictures around for hidden messages that don’t exist. Did you ever turn around the Mona Lisa? It puts Bosch to shame. Leonardo having sex with his entire family, a picture of a European Airbus dropping bombs on Palestinians, and a group of Chasids having pulled pork sandwiches while watching Jesus die on the cross. Do you think Leonardo meant that or is it just artistic coincidence?” I asked.

“The bottom line is that we don’t want to contribute to hate,” he said.

“Why not?” He asked with his eyebrows by his ears.

“What’s so horrible about hate. I don’t mean hateful acts. Just hate. Wives and husbands hate each other all the time. Doctors hate diseases. The bullied hate their tormenters. Cowboys hate sheepmen, Sheepmen hate cowboys. Progress is forged through hate. Want to turn us back to the Stone age?” I asked.

“I never heard such nonsense,” he said.

“Well I belong to the Shul shel ha nisi torabim brachim, which means the blessed haters, and when you criticize hate, you offend my deepest and most profound beliefs. So now what about offense?” I asked.

“I think you’re talking nonsense.” He dismissed me. “I speak Hebrew and it doesn’t mean that.”

“That’s because we hate Hebrew too. It’s an easy out to say it’s nonsense. Don’t you understand that avoiding offense is just joining the beliefs of those you might despise?” I asked.

We disagreed to disagree. He hadn’t a clue about my position and his position was purely offensive to me, which was a bit ironic. I took a look at the cover again. I looked at it closely.

Poor Mohammed looked positively embarrassed and humiliated. I felt like taking him for a beer and saying,

“Mohammed don’t take it personally. You tried your best. These guys are nuts. I think a lot of people are going to try to get rid of these cretins for you. We’ll all pitch in. After that, we’ll get rid of the chasid cretins before they get violent.”

We raise our glasses, take a big gulp and both shed a tear together. 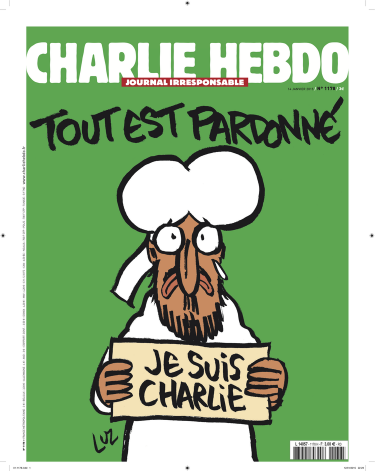