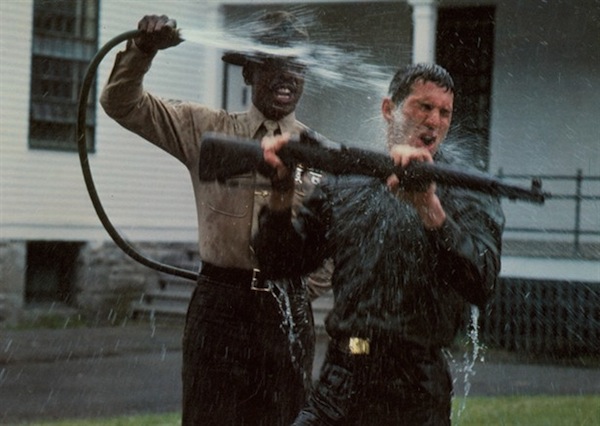 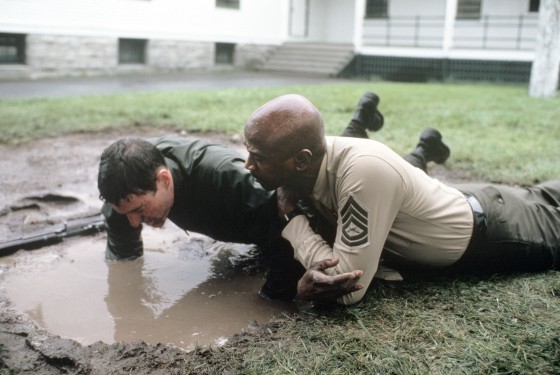 Marquel, TPVs NYTimes Bullets and Holes Section correspondent, was negotiating the price of a well-worn bullet-proof vest, when he read  Autopsy Shows Michael Brown Was Struck at Least 6 Times.  A private, family-requested autopsy shows that Michael Brown was shot at least six times — twice in the head — with all of the bullets striking him in the front. Marquel was fully impressed with this marksmanship. Six shots. All in the front. If you want to avoid charges that you shot a fleeing man in the back, that’s the way to do it.

Marquel decided to visit the Ferguson police department and see what they thought. Marquel went undercover as the Policehole View chief reporter. As soon as he showed them our logo he knew their limited reading ability could be steered to his preferred reading

“Policehole View, huh?” The sergeant said, ” aren’t you the guys who…”

“Yup, that’s us,”I said,” we do all that,” figuring any credit could only help my subterfuge.

“What’s the reason for waiting so long to release the various details?” I asked. “These are stupid questions I know but for a story we start with A and end with Z.”

“And if I say something’s confidential you’ll hold it back?” He asked.

“First rule of police publishing,” I noted, “without it we wouldn’t have got this far.”

“Okay we follow the white book, the incident manual published by the police association. We’re supposed to give out as little information for as long as we can, to create confusion, and never before everyone has his story straight. So it took a good week. The identity of the perp was last because he was having trouble learning his lines and how to say ‘Afro American.’ “

“Good,” I remarked, “seems like sound procedure to me.”

“I noticed the private autopsy was first. Most people were surprised the family went before the police.”

“White book’s quite clear about that. Any firm findings we’ve got to mention or we look like fools. Anything they miss we can miss making a potential accident look like a fact. And then we can add things that might be understandably overlooked by the first one. Like the marihuana. They had no findings so we put some in. Pretty hard to rebut when they have no affirmatively negative findings.” He said.

“Why were no clothes given to the family autopsy?” I asked.

“White book. Never give more than the body. Now they admitted they can’t estimate distance without it. So distance is our shot. We get the distance we like and send them those parts of the clothing that corroborates it. The rest of it was damaged or lost or contaminated in the panic.”

“One last thing,” I remarked, “the bullet holes. That’s a Michelangelo, a work of art.”

He picked up the phone, “chief, this guy says the bullet holes are a work of art. Michelangelo!” He hung up. He paused. “The primary rule of the white book is never have a bullet hole in the back side of any part of the body. It’s better to get rid of the body than have holes in the back. Especially with no weapon.”

“We’ll, as you know there are two or three methods. One guy can hold the perp facing you while you shoot him. The rule to follow is NEVER shoot once he’s dead. That shows up immediately on autopsy cause it doesn’t bleed. Then you’re shooting a dead body. Never do that.”

“Yes, I know,” I said “but the other method is very tiring and labor intensive.”

“Well sometimes you have to do method two.”

“We’ll you’ve got to run after the perp, who’s probably slow from bullet wounds, and even out race him. Then you turn around and shoot him in the front. We had to out race this one.” He said.

“Well you did a good job. A great job.” I said. “At least you didn’t have to use method three.”

“You mean where you say stop or I’ll shoot, he turns around facing you, and you plug him in the front? I say whatever works. As long as all the bullet holes are in the front it’s righteous.” He said.

“This one’s as righteous as Hell.” I said “I won’t mention the white book nor any details you gave me. Good bye, sir,” I said.

I love that. I gave him a peremptory brush of my forehead.
***
BY MARQUEL: Officer and  Gentleman. Not