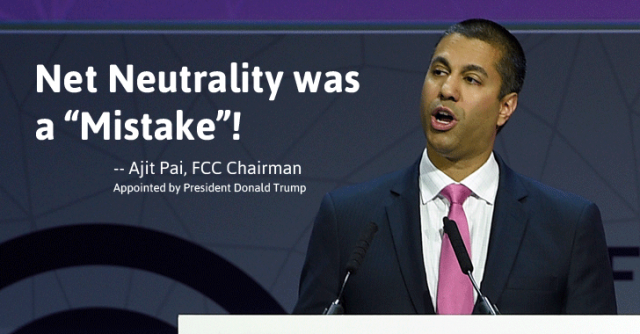 In a devastating reality check, TPV finds itself alone in its commitment to net neutrality. And because we are nobody’s b*tich, it means we are alone. The reality hit us when FCC Chairman Ajit Pai revealed plans to his fellow commissioners to fully dismantle the agency’s Obama-era net neutrality regulations. It is a major victory for dollars, we mean, for the telecom industry’s CEOs and their offshore accounts.

What does Trump-appointed Pai mean to do?

Pai, like any good son of immigrants would do, intends to scrap the FCC’s core net neutrality rules, which prohibit internet service providers like Comcast or Verizon from blocking or slowing web traffic or negotiating paid deals with websites for “fast lanes” to consumers.

How would this affect TPV?

TPV will continue its irrelevant irreverence.

Now, can we talk less fancy? Can we restate Pai’s actions for the Whitman lover in all of us?

OK, try this. Pai intends to give us his hand if we give him our money. If we give ourselves to him or Trump, before preaching or law, he will stick with us until impeachment comes. Amen.

That’s “Song of the Open Road.”

Open indeed, if you can pay Trump’s toll.

By DANA NEACSU: Pai’s Song of the Open Road