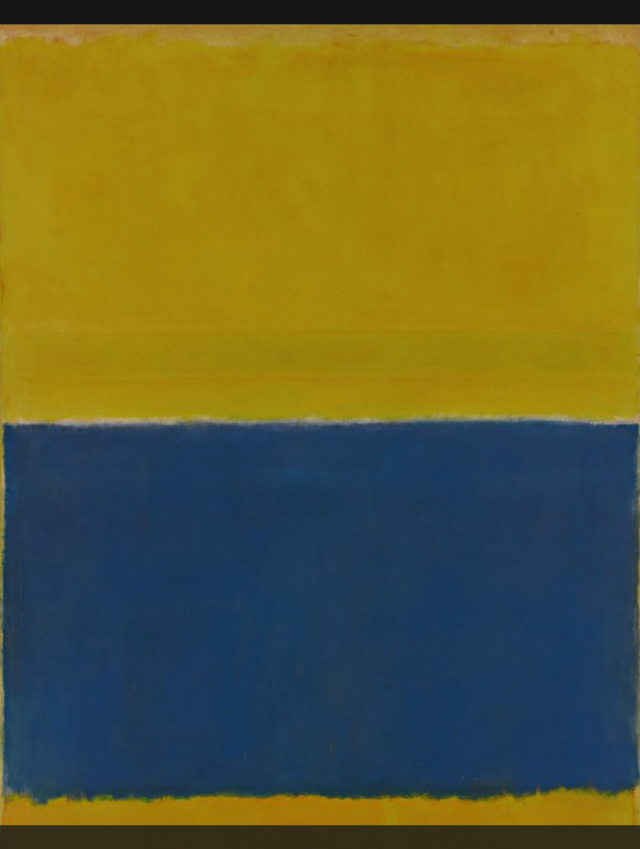 Marquel looked at the Rothko. It sold for over $40,000,000, according to A Rothko Tops Sotheby’s Contemporary Art Auction. Marquel, TPVs NYTimes What A Waste Section correspondent, looked at it for a while.

This was no effete modern work of art that low brow critics would criticize as being within the competence of an untrained monkey. Any monkey, untrained or not, could do better with his eyes closed. It’s  true of all Rothkos, however.  They are all exactly the same. Usually earth tones, they almost invariably are composed of a big square blotch of one uninteresting color on top, another equally uninteresting square blotch below, and a thinner, no more  interesting strip, again of uniform uninteresting color, usually dividing the other two, but in some cases, like this one, along the top or bottom.

The Times says enormously wealthy buyers are “parking” their funds in this art. And they mean it. It’s like a parking garage. When you use a garage, you don’t look to see if the space speaks to you, nor if it’s beautiful. The question is, will it keep safe what you’re parking. The same with these Rothkos. At the same auctions, spectacular Picasso‘s and Giacometti’s‘s changed hands. But they went for over $100,000,000. So if you want real art, Marquel guessed, you really have to pay for it. If not, $40,000,000 will get you a Rothko parking space.

Nevertheless, Marquel thought it would be incredibly amusing to hear what some critics who take this sham seriously would say about the Rothkos.So he stopped by Moma which appears inundated by Rothkos, and asked a curator why it was such great art.

“It’s so obviously stoic in its composition, and it speaks to the viewer through an elaborately predesigned conversation.” She said.

“Actually,” said Marquel, “I don’t hear a word. What you mean is that they’re all the same, right?” He asked.

“They are all similar. Not the same. It is exactly in that not-sameness that the conversation occurs.” She explained.

“I think we’re having more of a conversation than the painting is,” said Marquel, announcing to the world his status as a full fledged artistic boor.

Marquel went on to the Met. They seem to have a Rothko or two. He asked what made them so desirable to collectors.

“Obviously collectors buy for different reasons. But Rothko himself is unique. There is an exquisite conflicting simplicity and complexity battling beneath the surface. The viewer senses this and often feels swallowed by it all.” Said a curator.

“So am I a boor to think that what’s being swallowed is a lot of, let’s say because this is the Met…B.S.?” Asked Marquel.

“Well if you’re new to Rothko, it may take a while to feel what he’s doing.” He said.

“But I do feel it,” protested Marquel.

“Oh yes, I feel I’m being taken for a ride.” Marquel explained.

“I think you’re not giving it sufficient time.” He said.

“Well it’s been almost forty years since I saw my first Rothko and I’ve seen maybe twenty or thirty since. They’re all the same.” I said.

“But they’re not the same,” he argued.

“Because they’re different in their sameness.” I ventured.

He looked struck by lightning, smiled, and said only,

“exactly. You do understand!”

“But I really prefer Schad. He’s my favorite.”

I went down to one of the galleries in the meatpacking district and spoke to a dealer. “What’s with the Rothkos? Why are people fascinated, even satisfied, with the earth toned blotches?” I asked.

“I think if you have to ask that I can’t explain it.” She said.

“But you understand it and like it?” I asked her.

“Oh yes, it’s magnificent. What he did was radical and he did it over and over again. He was fearless.” She insisted.

“You don’t think that he just put one over on all of us?” I asked.

“I know,” I admitted. But I couldn’t leave a boor so I added, “I find the sameness so different, it ends up different. Too different for a conversation with it.”

She looked a bit stunned, and said, “That’s understandable.”

Not to me. But for parking, it might be useful.