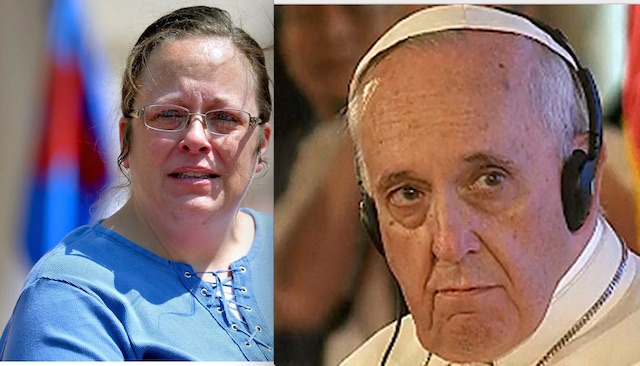 The Vatican confirmed that the pope met with Ms. Davis, who defied a court order on same-sex marriage, but would not elaborate.

Just before the pope left for the airport, Marquel went into the confession booth at the Nunciato, where the pope was staying in NYC. Sure enough, it was the pope’s gentle, low voice that asked me my sins.

“Well I’m afraid I did a bad job of reporting your trip. Father,” Marquel said, “I completely missed your meeting with that Kim Davis from Kentucky.”

“Don’t worry my son. Nobody else got it either. It was a secret meeting. You weren’t supposed to know it let alone publish it.” Said the Holy Father.

“But why did you meet with her? She’s not really a conscientious injector because she voluntarily ran for this office, not like a soldier who’s been drafted.” Said Marquel.

“That was a problem. You have very few conscientious objectors in America. You used to have many when you were a great country. Now they all flee to Russia or the Ecuadorian embassy in London. So she was the closest I could get to one.” He whispered.

“But, as I already said, she really isn’t a CO.” Said Marquel.

“She’s not even Catholic, I know. In Italian we say stupidaggine. But she was the best I could do. I’m sorry I disappointed  you.” The Holy Father explained.

“Well now you’ve made it easier for people here to mix religion and state and shirk their jobs.” Said Marquel.

“I didn’t mean to do that. Look at me. I do a thousand things every day I don’t believe in. But it’s my job.” He said.

“Well, for instance, I have a dresser.” He said.

“A piece of furniture?” I asked.

“I wish! No an actual person who helps me dress. I don’t believe in that as a matter of conscience. But when you’ve got a job to do and it comes with the job and others depend on you, you do it.” He said.

“Sounds like you would have married gay couples in Kentucky.” I suggested.

“Then why’d you treat Kim Davis with kid gloves?” I asked.

“That’s easy. I told you I needed a conscientious injector. For later, when the cardinals attack me for some of my planned changes. I’ll have to say, my conscience wouldn’t let me do otherwise. That’ll shut them up.” He said.

“So this is all part of a grand strategy.” I marvelled.

“That’s a conversation stopper.” I said.

“It sure is. You might say it’s my trump card.” He said, chuckling.

“That’s quite an ace in the hole. Do you admit Kim Davis is an idiot?” I asked.

“Let’s just say that even idiots need God’s help, and frequently more of it.” He said.

“So you might meet with her again?” I asked.

“No I don’t think so. There are so many more. Are you voting for Bernie?” He asked, looking at my buttons, and my hat, and my bumper sticker, and my hoodie. I shook my head.

“I told Kim to do that. Bless you. And bless Bernie.” I stepped out of the confessional and looked at the other side. He was gone.

BY MARQUEL: Pope Francis Flew over a Conscientious Objector