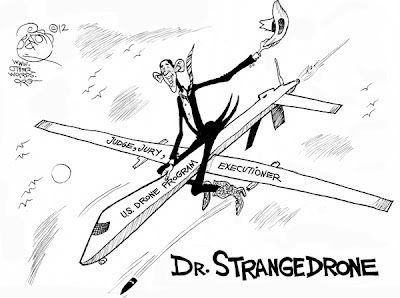 TPV is using the above visual without permission. TPV hopes that’s morally okay with both artists.

Here, each hole starts on Wednesdays and this is what fell through this past week:
On Wednesday, April 10, 2013, The White House still refused to send a witness to the Congressional Hearing investigating the secret killing of over three thousand people or as many as those killed on 9/11/01.
On Thursday, April 11, 2013, the White House continued to ignore any appearance of liberal democracy.
On Friday, April 12, 2013, finally, ten human rights organizations wrote a daring letter opposing the secrete use of drones to kill individuals deemed unworthy by a federal US agency.
On Saturday, April 13, 2013, The New York Times published the daring news.

On Sunday, April 14, Putin decided to put to shame the brave 10 human rights organizations when singlehandedly he barred 18 Americans from spreading their skewed views of human rights in Russia. Among them are four men who

Of course, America stands by its men and denies any soviet accusations.
On Monday, April 15, the US human rights organizations found some solace in Venezuela’s presidential election, which they will soon attack as violating some human rights they care about dearly.
[youtube id= SSnvmC5WCls width=470 height=315]

On Tuesday, April 16, uncertainty hovered over the two deadly bombs which exploded near the Boston marathon’s finish line, killing two and injuring a few dozens. While no one took responsibility for the attack no one reported seeing any drones nearby either. Which could mean the killers where not Americans.