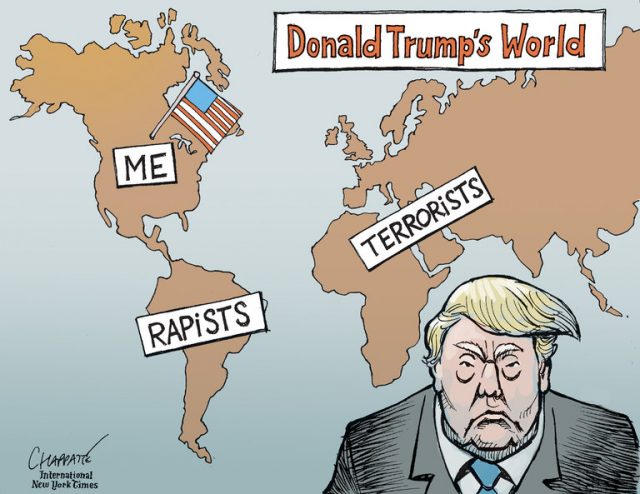 It seems that all Donald Trump must do to win friends and influence people — some people, at any rate — is perform a three-part magic trick:

(1) At an off-the-record lunch with network anchors, he intimates a forthcoming “compromise” on immigration, something that will be characterized by one anchor, CBS’s Scott Pelley, as a “major departure” — so major, evidently, that Trump omits it when addressing his nationwide TV audience a few hours later.

(2) In the evening, he uses a TelePrompTer to “sound presidential,” and the presidential sound becomes the day’s big story.

(3) Meanwhile, he refrains from calling journalists “the enemy of the people” for a day or two.

After No. 1, the anchors are pleased to have been admitted to the throne room for a private audience. Even if they call his immigration remark a “tease” (NBC’s Benjy Sarlin), or even more boldly, in the words of The New York Times’ Peter Baker and Maggie Haberman, a “head-fake” (crediting unnamed White House sources with the analogy), they feel prematurely that they have gotten closer to significant truth. If any of them have raised the subject of Attorney General Jefferson Beauregard Sessions III’s withdrawal from any Justice Department defense of voting rights, or Trump’s still-secret tax returns or Russian collaborations, they are silent on this too. Not only will they not report on Trump’s remarks (those are, after all, the rules of the game they agree to), but they will not report on the questions they ask.

No. 2 credits Trump with “aspirational overtones” in The Wall Street Journal, a “softer tone” on CBS News (“Viewers strongly approve,” says their poll headline, while the article notes that more Republicans than Democrats were watching), and wins him this subhed from The Washington Post: “In first joint address to Congress, Trump wins high marks for his steady, muscular tone.” Chris Wallace on Fox News: “Tonight, Donald Trump became the president of the United States.” The AP: “viewers stunned.” Happily, elsewhere in the paper, The Post’s Glenn Kessler and Michelle Yee Hee Lee fact-checked his speech and found — surprise! — “numerous inaccuracies.”

Three weeks after calling Trump’s statements “divorced from reality,” CBS anchor Scott Pelley finds him, “dare I say — presidential.” For his part, Newt Gingrich is “blown away,” while The Huffington Post, borrowing a rhetorical leaf — or layer — from The Onion, is less so: “Donald Trump Urges Unity Among All The Lawmakers He’s Insulted For The Past Year.”

As for No. 3, as our major news vehicles are slow to report what his agencies are doing, the delusion is furthered that presidential rhetoric is The Story. The grandest head-fake of all is to distract from policy, and the personnel who administer it, by reviewing Trump as a performer.

As Trump or his counselors may or may not understand in so many words, the result of his broken-field run across the presidency is likely to further damage popular trust in the media.

So, for example, you can read signs of whiplash in these words from CBS’ electronic commentator Will Rahn:

“Every so often, we get one of these moments where he seems so jarringly normal.

“President Trump’s speech on Tuesday was a success. The remarks were good and, on the Trump scale, delivered quite well. It hit the notes he needed to hit. It was optimistic — not Trump’s usual speed, but one he now seems equipped to use.

“But back to the “normal” thing. That’s been his critics’ big fear, that we would all get over the sheer weirdness of a President Trump, that we’d soon get used to it and accept. That our category for how presidents look, act and speak would expand to include him.

“Tonight, despite his sluggish approval ratings, that normalization process is well under way. Trump looked like a president Tuesday night, and that’s no small feat for anyone. It’s tough to get up on a stage like that and look like you should be there, no matter who you are.”

Neither Ronald Reagan nor Bill Clinton nor Barack Obama seemed daunted by the challenge to “look like you should be there.” But Donald Trump gets performance points when he can speak in whole sentences.

In America’s journalistic convention, the day’s news consists of items that “advance the story.” When this convention is literally adhered to, the news comes pre-equipped with a memory hole. The goal is not to be scooped on that latest developments, so a soft amnesia is built in. Whatever happened before yesterday is “history” — that is to say, been-there-done-that if not utterly extraneous. A new page has been turned!

For myself, I’m reminded of the moment three months ago when Trump captivated Thomas Friedman in a New York Times conference by repeating the words Friedman put in his mouth: that he, Trump, has “an open mind” on climate change. Two weeks later, Trump was appointing Oklahoma Attorney General and fossil fuel propaganda conduit Scott Pruitt to run the Environmental Protection Agency, which he has been busily suing. Thus does Trump obtain respite from investigation. If he can’t turn ABC or CBS into the kind of press he likes and considers “fair,” he can at least keep them off-balance, on the principle that a whipped dog that passes a day without a whipping may be expected to show signs of gratitude.

Trump is not new at the game of good cop, bad cop. It’s part of his deal-making m.o. After all, a consistent liar is harder to nail down than an inconsistent one. He hopes to wear out “enemies of the people” by leaving them gasping, doubting their own reality, fascinated by the mirrors within mirrors, bedazzled by the greatest show on earth.