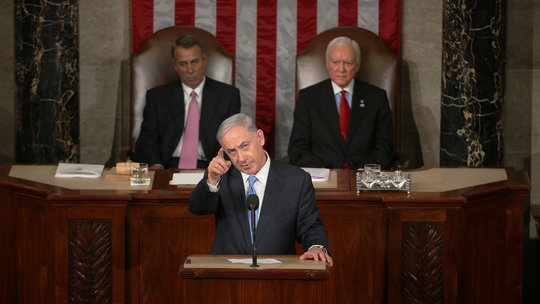 Marquel, TPVs NYTimes Who is the President Section correspondent, was eating a pomelo, when he read What Netanyahu Chose Not to Say in Speech Signals a Slight Shift.

After Wednesday’s speech, which resembled the State of the Union speech except for an absence of many Democrats and a plethora of rich American Jews in the audience, prime minister Netanyahu was mistakenly escorted by Capitol police to the White House where guards refused him entry.

“But I’m the President,” said Netanyahu.

“Of what country?” Said the guard, “You don’t look like Barak.”

The guard pointed East, “then your house is over there,” he said.

Netanyahu was surrounded by reporters, republican Senators and congressman, and a host of American Jews so right wing that they all tripped and dragged their left legs as they walked.

“I’m more of a patriot than Barak” grumbled Bibi.

“He’s more of a patriot than Barak,” chanted the Jews, as if they were in synagogue or at a Passover Seder.

He grumbled more. “I love America more than Barak.”

The Jews chanted, “He loves America more than Barak.”

He continued to grumble, “I love Americans more than Barak.”

The Jews chanted, “He loves Americans more than Barak.“

He looked at the Jews. “I love you all.”

The Jews chanted, “He loves us all.”

“Barak is different from us,” he whined.

The Jews chanted, “Barak is different from us.”

Netanyahu wondered, “Why won’t Barak fight my war for me?”

The Jews chanted, “Why won’t Barak fight his war?”

Eventually Netanyahu was sent back to the embassy, which he found “too modest for a President,” and promptly checked into the Hayes Adams hotel, the fanciest of fancy D.C.hotels. He ordered falafel from room service.
An Arab brought up the meal and when Netanyahu saw him, Bibi shouted, “He’s one step away from the bomb. Don’t let him take a step in here.” Red lights flashed.

All the Jews, who had followed Bibi to the Hayes Adams, chanted “He’s one step away from the bomb.”

Everybody left eventually. Bibi was alone in the room. He made a call. Soon a messenger was seen delivering documents. They were primary entrance forms to allow candidates to run in the presidential primaries.

Soon Hillary Clinton was seen arriving at the door. Bibi opened it a crack. Hillary first got a foot in the door, then forced it fully open, sending the rather rotund Israeli to the floor.

There was a scuffle, the lights went out, furniture was heard overturning, and Hillary left, one sleeve in shreds, blood on her fist, her hair a bloody mess, and the documents in her hands. A doctor had been called for Bibi.

“This is my election,” she said, as she left the hotel.

A handful of Jews still remained in the lobby. They chanted,

“this is her election.”

By MARQUEL: Won’t You Fight My War for Me?