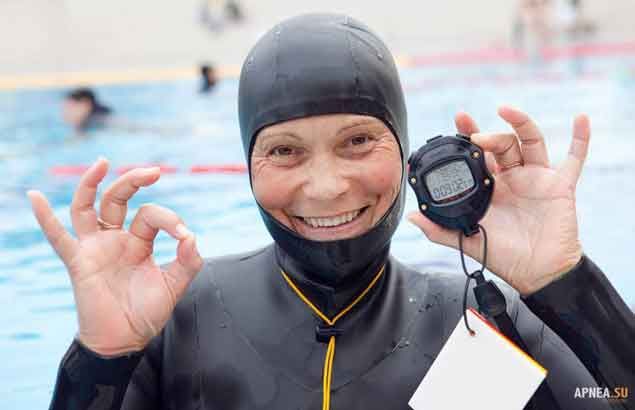 Marquel, TPVs NYTimes as Deep As You Can Section correspondent, was holding his breath while crossing Chinatown, when he read Free Diver Natalia Molchanova Remains Missing Off Spain.

The search for free-diving great Natalia Molchanova was set to resume Wednesday with little hope remaining she would be found alive more than two days after disappearing off Spain’s Balearic Islands. Marquel was fascinated by the “little hope” qualification to this story of a world record holding Russian free diver whose maximum depth and time stands at around 75 meters and perhaps eight minutes. The world record for submerging is either eleven minutes or twenty, depending.

Natalie’s been gone for four days now. Compare that to twenty minutes. By Marquel’s calculations, that makes Natalie the submerged diver champion by 288 times. She’s untouchable. But this is little hope? The Russians really are not known for their optimism but rather, Marquel mused, their fatalism. Marquel decided to talk to her son, who’s her business partner.
“I’m sorry about your mother. The Times says, however, that there’s a ‘little hope’ for her survival. How do you think she could hold her breath for four days? And even if she did, don’t you think she’d know we’re worried about her?” Marquel asked. “Wouldn’t she give off a bubble or two just to show she’s okay?”

“It’s a mystery. But she can really hold her breath so it’s not out of the question. Meanwhile we’re searching.” He said.

“No usually she just stays at the end of her rope.” he answered.

“So you think she’s at the end of her rope? I’d tend to agree.” Said Marquel.

“But we don’t know. She might have taken an excursion. We’re checking the currents and tides. She’s very adventurous.” He said, flashing a Russian smile, revealing his missing Russian teeth.

“Yes. If she drifted towards Ukraine, for instance, I’d be very worried.” He said.

“Are you accusing the west Ukrainians of some sort of bad faith interference? They couldn’t have shot her down…not when she was down already.” Said Marquel

“Well they don’t like Russians. We’re also looking into Norway. They’ve been on a campaign against Russian submersibles and that describes mamuscka to a T.” He said.

“Wow I didn’t think we’d get into foreign intrigue. This is getting compelling. Ukraine? That’s pretty far. So is Norway.” I said.

“Anything might have happened. That’s why we still have hope.” He said.

“A little hope,” I reminded him.

He flashed his smile again. I could see his tonsils. He looked at his mobile which had beeped. “Aha!”

“Maybe. Maybe not. They found a flipper on the beach at Réunion island. It could belong to mamuscka.” He said.

“Réunion? Off of east Africa? She was diving near Spain.” I cautioned.

“Yes but four days could lead her anywhere.” He said.

“She could be at the end of her rope.” I reminded him.

“Yes, she could.” He was tapping a message to Réunion, I guessed, so backed out quietly.

I held my breath.
***
By MARQUEL: With a Little Hope from Your Friends