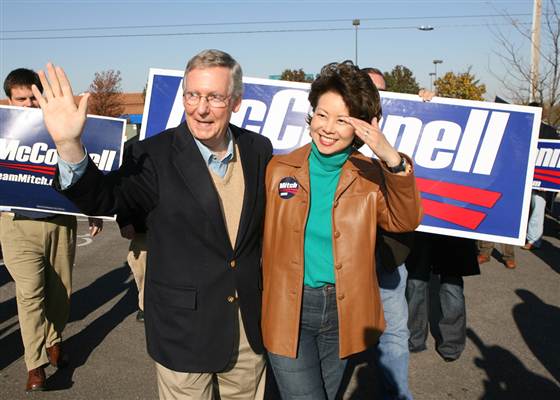 I came to America with my Chinese parents. And money. Like every Chinese immigrant we did speak bad English. But unlike the millions of them, we had money. I mean MONEY. Soon our English improved and using my immigrant story, and MONEY, I went to Harvard. To its Business School.

Upon graduation I applied for and was granted a White House Fellowship in 1983 during the administration of President Ronald Reagan. I liked the City, Washington, D.C., so much that I never left it.  In 1986, I became Deputy Administrator of the Maritime Administration in the US Department of Transportation, and from 1988 to 1989, I served as Chairwoman of the Federal Maritime Commission. You may wonder about my credentials. My father is a Chinese Onassis.

But let me continue my immigrant story. I held other government jobs before my stint as Labor Secretary under George Bush. You may wonder why labor. Because my father employs labor and because without labor (no comments to impertinent questions like, whose?) I could not be where I am.

Finally, I am mostly proud of my marriage to a Southern Baptist, and father of three children (again no comments to impertinent questions like, whose?). He is from Kentucky. But we stay away from Kentucky Fried Chicken. That food is only for new immigrants and labor. My husband, 21 years my senior, is also a government servant. I don’t mean servant as in labor. I mean it as in he greatly benefits from the government which serves him and me.

One more clue. I keep index cards with the names of every person I meet. You’re correct I do not consider meeting just talking to anybody unless their annual income is managed by a trust fund.

So, who am I? Am I just a pretty 53-year-old Chinese face in the crowd?

If you think I am Tiger Lady as in Rupert Murdoch’s former wife Wendi Deng, you’re close. Or, you’d be ‘Marco,” as in “Marco Polo,” the children’s water game, where you scream Marco when you get closer. But I do not have any sense of humor. Like Wendi. Wendi Deng. Don’t say she’s prettier or you’ll suffer.

AMERICANISM: Another Faceless Immigrant Story in a Land of Immigrants