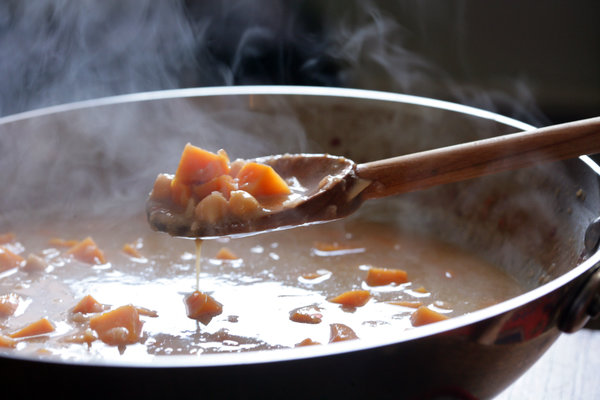 Marquel, TPVs NYTimes Curry Section correspondent was cooking a delicious chicken pot pie, when he took a break and read that Britons Are Perturbed by a Troubling Shortage of Curry Chefs.

Curry is so important to the British palate that it has its own committee in Parliament, but curry advocates say immigration restrictions are causing staff shortages. Marquel wondered why the curry committee couldn’t just let a few chefs in. So he called them.

“Uh, yes. We’re called the Parliamentary Subcommittee Charged With Health Education and Nutrition Of The Former Jodhpur Territories.” He explained.

“Well of course. How can I help you?” He asked me.

“What’s the deal with the curry shortage? I’ve never heard of such a thing.” Said Marquel.

“There is no shortage of curry. The shortage concerns personnel. Particularly curry chefs.” He said.

“It seems to be spontaneous combustion. They cook the curry, stirring and all, and it seems that as they turn up the temperature, poof, they’re gone.” He said.

“Wait a minute. How high do they turn it up?”I asked.

“The last two disappeared right after they said they were turning it up to ten.” He said.

“I know the answer. We had a band called Spinal Tap. Every time they turned the amps to eleven, poof, as you say, the drummer combusted.” I said.

“But we have no eleven. Ten peppers in the menu is all that’s allowed.” he argued.

“There was no eleven on the amps either.” I added.

“Yes I think some of your chefs have found the eleven.” I said.

“How is that possible?” He asked me.

“Couldn’t. They were in Cleveland. Nothing works right there. They simply got new drummers.” I explained.

“We can’t do that. There are no chefs. All Syrians and Afghans.” He complained.

“Can’t they cook? I asked him.

“Camels and Harrisa. People come in, order goat vindaloo and they get camel falafel.” He said.

“That must be a shock. What if you tell them to make it spicier? If it’s hot enough, they might not notice its just a falafel.” I suggested.

“We will issue an advisory. So far work has stopped at about ten per cent of our offices and factories. They can’t work without the curry.” He said.

“They just need the heat. We’ll tell them to make it spicier.” He said.

I said good bye. Next day Mufi called. He was busy spicing chicken so it tasted like dog. It’s a long process including burying in the earth with a bone until they’re dug up.

“Turn up the heat on Harrisa? That can be dangerous. We used it instead of water boarding. Much more effective than  water boarding and they told thé truth.” He told me.

“Like with all spicy food no matter how torturously hot, they want more. So they told the truth to get it.” He said.

Three days later, Mufi called back. “What did they tell those Syrians?” He asked.

“No wonder. They’re all on eleven and all gone whose idea was it?” he asked.

“Do they know about where these people come from? They’re ice cold. They land in cold water. Unheated tents. Put them in a fancy kitchen, say spicier and you know what happens?” Asked Mufi.

I knew Mufi knew the answer. A famous spy from way back, mostly famous for working for the U.S., China, and the USSR simultaneously at the height of the cold war, there was literally nothing he didn’t know. And a master  chef to boot.
“What?” I asked.

“They hit eleven by accident. They’re still metabolically cold. They turn the heat up, think it’s ten, it’s really eleven or higher and poof. Not one left. Thirty burned last night. There’s no curry left in Britain.” He said.

“That’s disastrous.” I said. “What are they going to do?”

“Cameron announced new austerity measures. No more social spending. No taxes on the rich so they can seek curry elsewhere. Rejects climate change so fifteen more combusted this morning. He said, ‘let them eat chutney,’ and now people are in the streets.”

“Wow,”  I said,  and went into the kitchen to turn down my chicken pot pie. Left out the pepper.
***
By Marquel: Collateral Curry Damage