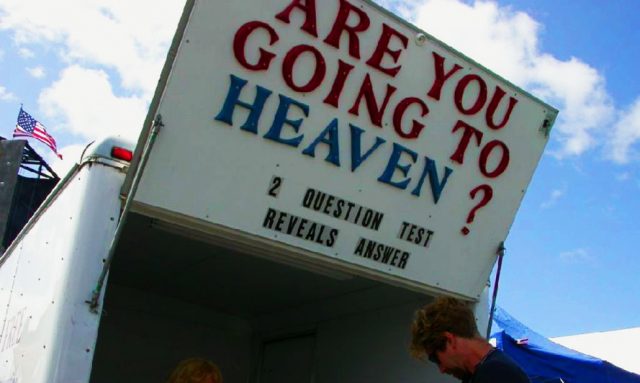 Marquel, TPVs NYTimes Heaven Section correspondent, was thinking how easy Catholics had it, when he read Dogs in Heaven? Pope Francis Leaves Pearly Gates Open.  Pope Francis’ remarks to a distraught little boy whose dog had died have caused a new debate on whether animals have souls, suffer and go to heaven. What Francis actually said is even more heaven-shaking: “Holy Scripture teaches us that the fulfillment of this wonderful design also affects everything around us.” In other words, EVERYTHING is going to heaven. Not just dogs and cats, but otters, snapping turtles, elk, killer whales, the flu virus, no-see-ums, the piece of spinach that got stuck in your second molar last night. In heaven you’ll see that spinach again. What will you say, “tasty,” or “sorry I ate you?”

Marquel went to the Manhattan Seminary and spoke to one of the brothers.
“He did say everything, right?” Asked Marquel, “meaning plants, one celled animals, and viruses. Even retroviruses.”

“It looks like HIV is going to heaven, you’re right,” said the brother, but added, “it’s heaven so no ones getting sick.”

I really don’t want to go to heaven if there’ll be no-see-ums,” I said, “that would be hell.”

“They’ll probably swarm around cause it’s heaven and they’ll be happy. But there’ll be no biting, “

“But what about every meal I’ve ever had. It’s all coming back,” I said, thinking of vomit on a celestial scale.

“Obviously,” said Brother James as his name turned out to be, “this will be heaven. If something comes back it will do so in a heavenly way.”

“I really don’t get it. If the cow that the liver came from that I threw on the floor when I was five (pretty much through thirty five, to be honest) comes back does he come back as chopped liver or as a cow?” I asked.

“I’m sure as a cow with his liver intact. These are souls, not bodies. And in heaven nobody bears a grudge. He’ll probably find it amusing.” said James

“And if Hitler doesn’t make it…” I was interrupted.

“…never for éternité,” said the brother.

“That means every dog that was ever born, every litter flushed, will all be around us. I love dogs but that might be enough.” I complained.

“Since its heaven, you won’t mind. You’ll be ecstatic.” He said.

“But it sounds like with all these new admissions, it will be like Times Square on New Year’s Eve.” I worried.

I hemmed and hawed. “There’s something I have to know.”

“Ask away. If I don’t know we’ll figure it out together.” He said.

“Is sinning allowed in heaven?” I asked.

“But then it’s not heaven. I thought it was heaven.”

“But how can it be when the most fun things in the world are sins? Maybe a one-nighter, or something with a group involved…things we dream about. Not in heaven?” I asked.

“I’m afraid not. But the same pleasure will be available for things you don’t even think about now. Don’t worry,” he said, patting my shoulders.

“Not even a little touching??? Even self-touching?” I pleaded.

“You will get the same pleasure just from giving comfort.” He said.

That sounded worse than perverse. I just hoped they’d let me touch a Peter Luger steak now and then. The only problem will be to keep the dogs away. I think I’m ready.
***
BY MARQUEL: Heaven –  Steps Away