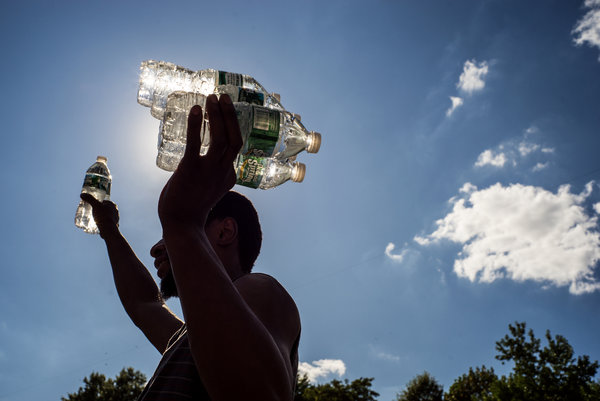 No, You Do Not Have to Drink 8 Glasses of Water a Day, read Marquel, TPVs NYTimes What’s on Draught Section correspondent.

There is no science behind a formal, one-size-fits-all requirement of daily water consumption. The author of The Times article believed we need no water at all.

“Without scientific evidence, it is foolish to teach anecdotal conclusions,” he asserted.

“Well it’s hard to do a controlled study. But what about all those bodies you find in the desert. Doesn’t that prove, if only anecdotally, that water is essential?” Asked Marquel.

“Not really,” said the author. “We don’t know why they died. It could be the sun. Or sand fleas. Or wind. Or even loneliness. Without controlled studies we know nothing.” He said.

“There’d be a lot of people dead without them,” he said.

“Yeah but there could be a lot of people dead anyway if you insist on every thing being controlled.” I said.

“I think maybe more people will die drinking all that water than if they didn’t,” he insisted.

“What about food? Do we have studies showing we have to eat or do we just know it?” I asked him.

“No and it might be unnecessary. Leave people out in the sun and they’ll make their own food from the solar energy.” He said.

“That’s absurd. We’re not plants. we can’t engage in photosynthesis.” Said I.

“We have nothing to show we can’t. Dye your hair green if you start getting hunger pains. You don’t need food at all.” He said.

“And some green dye will substitute for chlorophyll?” I asked.

“More than likely. Plants need chlorophyll because they’re plants. But we don’t. A little green and we’ll be manufacturing sugars and starches, and solve the global warming crisis as well.” He assured me.

“How will we do that? We’re the ones who caused it.” I said.

“But if we suddenly stay in the sun and generate our own food with solar energy, we’ll also convert CO2 into O2. Clean up the planet real quick.” He said.

“Okay no drinking and no eating. What’s next for controlled studies?” I asked.

“Not too much. It’s just a question of resisting conventional thinking. For instance, sex is not necessary for conception.,” he said.

“You mean we’re all virgin Mary’s?” I asked.

“We could be. There are no controlled studies. Take me for instance. When I was born and conceived, my mother was living only with her father. Obviously he didn’t cause the pregnancy.” he said.

“So the species could easily survive without these various rites that just lead to resentment and jealously.” He said.

“That would be an improvement, and with no water, no food, sitting out in the sun with green dye, life would be a lot easier.” I said, suddenly taking to this crazy doctor.

“Well don’t get your hopes up, you might not waste so much water, but you’ll still end up dead in the end.” He said.

“Everybody dies.” He insisted.

“Any controlled experiments?” I asked him.

He smiled at me, his new friend. “Not in a formal sense,” he commented.

“Well there you go,” I said, feeling suddenly much better about my prospects.
***
By MARQUEL: If Only the Hopes