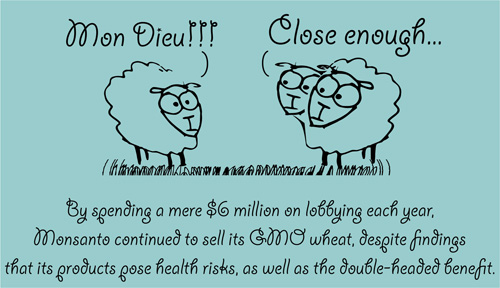 We may not think that the Japanese are our keepers, but they are, and may the power remain with them.
In 2004, the United States Department of Agriculture denied approval for commercial use of Monsanto-created, genetically modified strain of wheat. But, that did not deter the big corporation from continuing its revolutionary work – its aim is to induce double-headed animals, or people. By spending a mere $6 million on lobbying each year, Monsanto continued to sell its GMO wheat, despite findings that its products pose health risks, as well as the double-headed benefit. Congressmen and women, who benefit from no brain and do not care if they end up double-headed, passed the “Monsanto Protection Act,” which allowed the selling of the GMO wheat despite the USDA ban.
All would have gone as well as it did for almost a decade, hadn’t an Oregonian farmer recently alerted federal agents (hopefully not those trying to recruit Russian agents) to the GMO wheat he had found in his crops.

Now, the American people may not care too much because many of us do not know what GMO wheat is — whether it refers to Chinese food or not – or whether it impacts us in any other way than making us bigger. Luckily, for some of us, Japanese authorities had heard the news and opted to cancel part of a tender offer to buy US western white wheat.

“We will refrain from buying western white and feed wheat effective today,” Toru Hisadome, a Japanese farm ministry official in charge of wheat trading, told the agency. “We do not want to go the way the Americans went since 2004, all the way into the rubble, bought by the Chinese, and led by Republican morons or Democratic eunuchs. We still have some national pride.

The way TPV sees the connection between these events is that maybe we should vote to send Japanese to Congress.