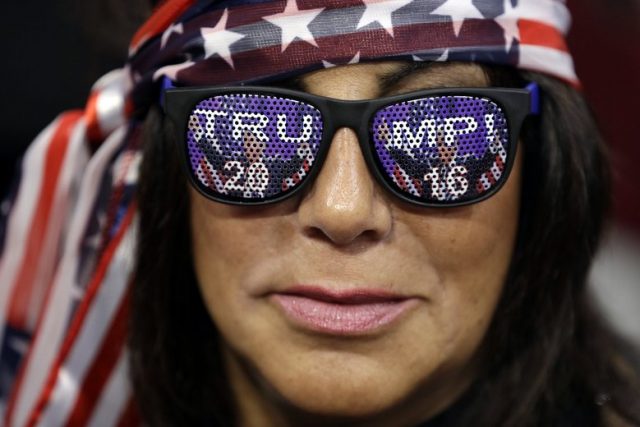 Duck Dynasty guy is in the hallway below the stage apparently getting ready for his speech to the convention—he’s wearing his camo get-up and flag bandana but softly singing libretto to Don Giovanni in perfect Italian (slight Turin accent). Guy knows his Mozart. Sounds good–like a young Pavarotti. Makes me question his supposed Bayou (or wherever he’s supposed to be from) background. Onstage his Italian accent replaced by something from the backwoods. Impressive, but I’m not sure I’ll ever be able to watch Duck Dynasty the same way again—like when I was a kid in the 80’s and first found out Madonna couldn’t really sing. Sad.

VIP room, Trump grandkid Barron berates local Cleveland woman working the room for brown goldfish crackers not having been removed from the bowl of mixed goldfish—says rider he signed expressly stated this wouldn’t be the case and screams at Melania before striking the woman several times on the knee (he’s about eight, so still pretty short).

Searching for backstage bathroom when one of the Trump organization security goons exits what I assume is the bathroom—I go in before door closes and see an ordinary maintenance/storage room, with one exception: Christie family bound and gagged at the back. Was able to conduct a brief interview before goon returned (they could only shake heads yes/no and make grunting sounds). Upshot is I can report they are being treated well and expect to be released after November. Claimed to miss NJ, but their non-verbal enthusiasm to get back home wasn’t convincing.

In the wings to the stage as Chachi (Scott Baio) prepares for his speech. Hear him on his cell phone saying he “doesn’t know why he agreed to this” and “Ralph Malph would make a better president.” [sorry to Millenials unfamiliar with Happy Days for obscure character reference—spend a few hours on Youtube getting acquainted -TPV ed.]

At the urinal below the stage when The Donald himself walks in. About eight open urinals and the guy takes the one immediately next to me—WTF? Racism/fascistic tendencies aside, this is the sign of a sociopath. Expect him to get right to work but instead he’s going through his jacket pockets and eventually removes a pair of white gloves (like a butler would wear). Catches me looking at him and smirks—says, “What, you think I’m going to touch it with my bare hands?” Amazingly gloves and hands seem to be normal size. When he finally gets down to business, gloves safely on, I can’t help myself—glance over the partition again hoping to be able to settle the rumors, and let’s just say what I saw I will never be able to forget. More shocking than the Cruz speech. Glad this thing is ending soon.