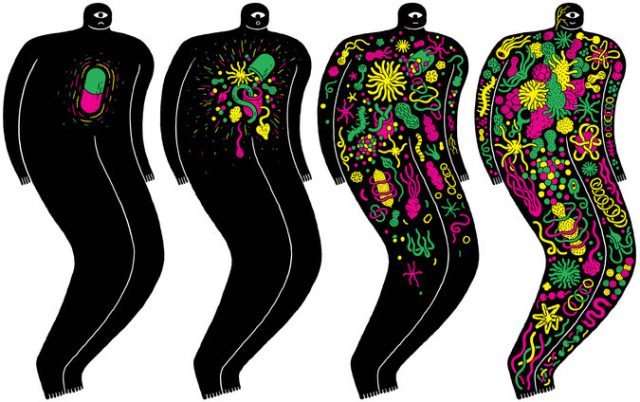 Marquel, TPVs NYTimes Banking and Depositing Section correspondent, obviously stopped drinking a while ago and given to bouts of boredom read Should We Bank Our Own Stool?

The benefits of restoring our microbial system become more and more obvious. We need a way to make this system reboot easier. Holy shit,  thought Marquel,  they want to establish banks for feces.  Would you get an app?  Could you do mobile deposits?  Talk about a brave new world.  Marquel went to talk to the scientists.

“Every time you have a course of antibiotics,  especially a broad band but even a specialized antibiotic,  you wipe out the bacterial flora in your gut.  This kills people just as much as the original disease. In fact with c.difficule, a more and more common incurable bacterial disease in many,  the patient will die without an autologous fecal transplant. As well,  people with digestive problems will continue to suffer with no hope of cure if this is the cause of their problems.” Said the doc.

“It just means consuming your own feces,  in a small pill, from a sample taken before the antibiotic treatment.  It’ll restore the flora almost instantly. ” He said

“And you want to start a bank for people to deposit  their. ..deposits? ” Asked Marquel.

“Yes.  A national bank.  Everyone will have an account and it can be renewed from time to time,  but not often at all. ” He confirmed.

“It’s not that kind of bank. Plus, ” he said,  warming to the subject,  you might say,  “you’d probably say you’ve had enough of it already.”

I laughed to make him comfortable and asked, “fair enough.  But do you get a Mastercard,  or at least a blender when you make your first…deposit? ”

“I would hope so.  It would be a single bank that we all would need,  except for a tiny few exceptions.” He said.

“So still they’re a bank.  They could give out loans.  That would turn a profit. ” I said.

“Once again,  it’s not clear anyone would have any interest in borrowing this kind of currency. Only the depositor himself.” He said.

“Okay I see this story is a bit different than I imagined. What do you think the presidential candidates would say about this kind of bank? ” I asked.

“I think it crosses partisan boundaries. ” He ventured.

“No.  Not at all. Everyone would just have the same in their accounts.  All accounts would be equal. Same balances,  you might say. I think Bernie might like this. ” He said.

“Like it?  He’d love it. What are you going to call this bank? ” I asked.
“We haven’t really thought of that.  Autologous fecal transplant bank,  I suppose . Got a better idea? ” He asked.
I already knew but I decided to look like I was struggling.  Wow to go through life knowing I’d named a national bank. Finally I said,  “how about…Shitibank?”
He smiled but it didn’t look like he was ready to swallow it.
***
By MARQUEL: Ready to Swallow This, #GoldmanSachs?